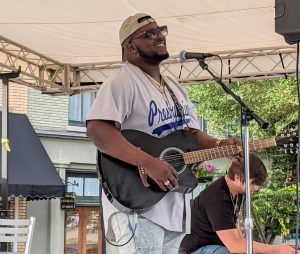 Former Presbyterian College offensive lineman Jerius Duncan has moved on to music after injury sidelined his football career. He received a “Golden Ticket” on this season of American Idol.

The broken leg changed everything for Jerius Duncan.

Duncan started 20 games for Presbyterian College in 2016 and 2017 as a freshman and sophomore, but the broken leg ended his college career, paving the way for new dreams and new opportunities.

“It was kind of like, ‘what do I do now?’” said Duncan, a Simpsonville native and Woodmont product. “I really started doing theater, and I liked to sing and that part of theater. I could do it a little bit and thought I could get better if I actually practiced, so I took lessons and actually became an opera singer.”

That talent was on display Saturday in downtown Laurens as Duncan took the stage along with friend and collaborator Braeden Webb of Clinton as part of Palmetto Brothers Dispensary’s Grand Opening celebration.

The rich baritone, operatic pipes were on display briefly as Duncan led the crowd in “Happy Birthday” to Dispensary co-owner and friend Wes Meetze, but then Duncan turned to his acoustic guitar and a soulful falsetto.

That combination and his original song, “I Can’t Breathe,” earned Duncan a “Golden Ticket” on the latest season of American Idol.

But the concert on the Square Saturday was one of the Class of 2020 PC graduate’s first local performances since then.

It’s all part of what Duncan is calling “kind of a cool journey.”

“I’ve been at the first step, I feel like, for about a year now,” he said. “I think I’m approaching the second step, but, you know, it’s kind of taking God’s time, day by day, and I’m seeing what tomorrow holds.” 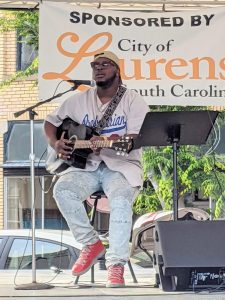 Jerius Duncan made his first appearance at an outdoor venue on the Laurens HIstoric Square Saturday night.

With his voice training at PC, Duncan began to form his own style, choosing R&B – a family favorite – and infusing his own twist to that genre and others, including pop and country.

On the Square Saturday night – Duncan’s first time playing an outdoor venue – he performed his own renditions of the Chris Stapleton country hit, “Tennessee Whiskey,” as well as some of the R&B classics he has listened to all his life.

“R&B is what I grew up hearing,” he said. “I really love all different genres tough, but it was probably the easiest for me to really take on because my dad (Herb) is always singing around the house. My mom (Gala) always plays R&B music, so I grew up listening to it.”

American Idol and other talent showcases have changed the game for singers and musicians, and Duncan said being on the show was an eye-opening experience in the age of social media “influencers” and instant fame.

“For me, it was more of a growing experience,” he said. “I’ve only really been doing R&B and soul for about a year now, but the American Idol thing started back in September, so I was really only about three or four months into even being considered an R&B singer. I had to understand that it was more than just singing. It was about how you look, how you carry yourself, and I feel like I did all those things well, but I was going against people who were at the top of the game. Some of them already had 170,000 followers (on social media).”

Duncan said he had a couple of thousand then.

“I realized I had to come back home and kind of build that, so I’m trying to do a lot of that stuff now,” he said.

Duncan has released a single, “I Can’t Breathe,” which he played for the American Idol judges, online and has plans to drop more music on June 5 ­– his birthday – with his EP called “Reissue.” The EP will be available on Spotify, YouTube and other streaming services and precede several concert dates planned for this summer in the Upstate.

“They were songs I wanted to do that are outside my comfort zone,” Duncan said of “Reissue.” “It’s me trying to challenge myself.”