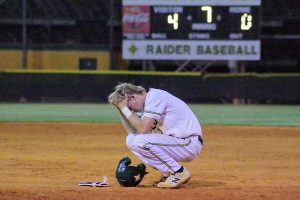 Laurens shortstop Thomas Willis is dejected after a 4-0 loss Friday night to Lugoff Elgin that ended the Raiders’ season.

It took Laurens head coach Tori Patterson nearly a day after the Raiders’ playoff doubleheader sweep at the hands of Lugoff Elgin to find the words:

“Tough night last night but I cannot express how proud of this team I am,” Patterson wrote on Twitter Saturday. “Our guys battled all year and left everything they had on the field. We will be back!”
Finally, he found the right words, but he still had no answers after back-to-back shutouts – by scores of 3-0 and 4-0 – to Lugoff Elgin Friday night.

The losses ended the Raiders’ season and a playoff run Patterson and his players truly expected to take much deeper into the playoffs, perhaps all the way.

“We hadn’t (stunk) all year,” Patterson said after the second game of the doubleheader, a 4-0 loss. “I hate that it had to happen tonight. It’s tough to live with, but I can live with the fact that we just didn’t have it. We put run runner on third in two games? If you’d told me we’d go 14 innings and not score a run, I would’ve told you that you were crazy.”

LDHS came into Friday’s playoff for the district championship with just about every advantage. The Raiders (18-10) were fresh off of a 12-4 win over the Demons on Monday.

Lugoff Elgin, which advances to the Upper State bracket with the win, had to play an elimination game against Easley Wednesday, depleting its pitching staff as the Raiders rested.

But the Demons (17-13) sent USC Upstate signee Will Morris to the mound, and he out-dueled Region 2-4A Pitcher of the Year Jackson Edwards. 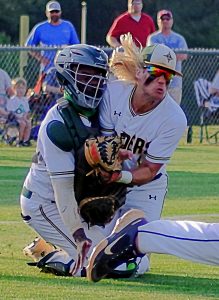 Laurens’ Zak Rice, left, and Zach Faulkner collide going for a bunt during Game 1 of a doubleheader sweep Friday at the hands of Lugoff Elgin.

Morris allowed six hits, walked one and struck out eight in his complete-game shutout victory.
Edwards went the distance for LDHS, but the Demons took a 1-0 lead in the first inning after lead-off hitter Cobe Evans started the game off with a single and later scored on Banks Munn’s RBI groundout.

Still, the Raiders, who averaged nearly seven runs per game this season, saw no problem. They also have been notoriously slow starters. Evans scored again in the fifth as did Max Branham to give Morris a 3-0 cushion. Branham went 2-for-3 with a run scored.
Thomas Willis and Austin McNuer both were 2-for-3 at the plate for the Raiders.

Prior to that loss, LDHS had put together a 13-3 record over their last 16 games en route to the program’s first region championship since 2009. The Raiders’ only other shutout during the regular season was a 4-0 loss at Blue Ridge on April 14.

Facing elimination for the first time in the playoffs, the Raiders’ bats were stagnated by 8th grader Jake Morris, younger brother of Game 1 pitcher Will Morris.

Morris, who allowed one hit in 4 1/3 innings, and two other Demon pitchers combined for a three-hit shutout. Morris picked up the win, and Skiler Jackson pitched the final 2 2/3 innings for the save.

LDHS starter Parker Clarke allowed four hits in six innings of work, striking out six and walking one in the loss.
Clarke allowed three runs, two of which were earned. Kalob Hamilton pitched the final inning, allowing a hit and an unearned run.

The Demons were helped by three LDHS errors in Game 2, but the story for the second straight game was the Raiders’ lack of offense.
Sully Pinson, McNuer and Zach Faulkner each managed a single base hit for LDHS.

The game ended with Pinson on first base.

“We put some pretty good swings on it, but they just shut it down,” Patterson said.