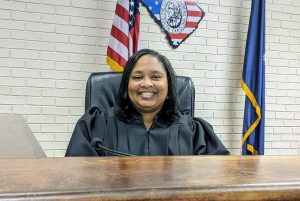 Jackie Williams crosses through the garage at the Laurens Police Department, walking behind the city’s trolley and stepping into a space no one in Laurens has occupied before.

“Basically, getting this job means the world to me,” said Williams, who was recently hired as the city’s first full-time municipal court judge. “I’ve always wanted to be a judge and to be able to get the opportunity to be one full-time and for the first time ever in the City of Laurens is just amazing.”

For Williams, the job is the fulfillment of a dream, but for Laurens, the opportunity was born out of necessity. The local court system is backed up due to a hiatus in courtroom activities caused by the COVID-19 pandemic.

Adding a full-time judge in Laurens takes some of the burden of playing catch-up off of county magistrates and gives the city a chance to cut into its backlog of cases.

“There were several needs, but one was to do away with the backlog of jury trials and to give defendants an opportunity to have a faster court date and give the officers the opportunity as well to schedule more court dates instead of having one big docket,” Williams said. “Now, they can break it down, and we can have court more often.”

With Williams’ ascension to the bench on a full-time basis, and Chrissie Lattimore leading the Laurens Police Department as chief, African-American women now fill two of the top law-enforcement positions in the City of Laurens – an accomplishment that neither takes lightly.

Williams, a former Laurens Police officer and school-resource officer, and Lattimore entered the police force together more than two decades ago.

“In the black community, a lot of times, they don’t see a lot of positive stuff, so to be able to be that face for (minority children) and to maybe be a mentor for them is important.”

Williams receiver her bachelor’s degree in criminal justice from Lander and her master’s in the same from Anderson, and it was all with this goal in mind.

“I’ve been continuing my education to get to this level and to this point,” she said.

Laurens itself was at a point that it had to make a change in its structure at the judicial bench.

“Having a dedicated judge for the City of Laurens has been a long time coming,” said Lattimore, noting that serious discussions among city leaders about the position started about a year ago.

Lattimore pointed to the addition of as many as 4,000 new homes in development and a population increase city officials believe to be on the way.

“With that kind of drastic population increase in the city, we’ll see an increase in traffic collisions and, unfortunately, in criminal activity,” Lattimore said. “In order to prepare for that, it was in the best interest of the city to begin that transition to a full-time judge.”

Lattimore said Williams set a standard in a part-time role on the bench.

“She proved herself to be fair and impartial in the community,” Lattimore said. “She has the respect of community members and police officers, and it certainly fills a void we have needed to fill.”

Williams said fairness is at the heart of who she was as a police officer and who she is and will be as a judge moving forward.

“I want to be fair and consistent,” she said. “Defendants have a right to a fair trial, and that’s what we give them.”