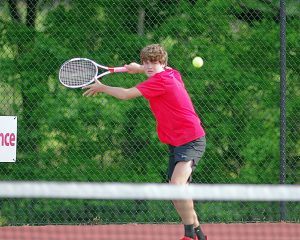 Clinton’s Connor Donley got two wins Tuesday in a 4-3 victory over visiting Seneca in the Class 3A Upper State Finals.

Clinton’s Ike Waldron busted some strings on his racket during his No. 1 doubles match Tuesday in the Class 3A Upper State finals against visiting Seneca. But that’s about the only thing that went wrong for Waldron and doubles teammate Connor Donley in a 6-1, 6-1 win over Seneca’s Levi Leard and Joseph Burgess that clinched a 4-3 victory and a return to the state championship for the Red Devils.

Clinton, making its third straight Class 3A finals appearance, is to play Lower State champion Oceanside Collegiate – at 1 p.m. Saturday at the Florence Tennis Center. Oceanside was a 6-0 winner over Waccamaw Tuesday.

The doubles tandem of Waldron and Donley have been pressed into competition only one other time this season, but both times the pair came away with easy victories.

“We just kind of wing it,” said Donley.

“We practice against each other every day, so that kind of helps,” Waldron said.

Seneca pushed the Red Devils to a 3-3 tie after the first six matches, taking wins at No. 2 doubles and the Nos. 4 and 5 singles positions.

“I knew they were going to be deeper, but I felt like if we could get those points at one, two and three, we could get to No. 1 doubles,” said Clinton head coach Clovis Simmons.

The two teams held serve in the first two games of the match, but Waldron and Donley broke Leard to go up 3-1 and then
reeled off the next three games of the set.

Donley’s service was broken in Game 4 of the second set, but he and Waldron already had built a 3-0 lead at that point.
Ahead 5-1, Waldron put away a shot that Burgess was unable to return to clinch the win.

The Red Devils (14-0) cruised through Daniel 4-2 and Blue Ridge 6-1 to advance to the Upper State championship.