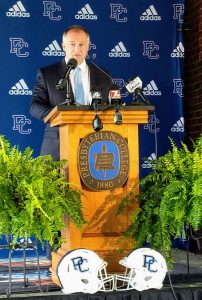 Presbyterian College reached into the high school ranks to hire a coach known nationally for his non-traditional brand of football.

Kevin Kelley, a coach known for rarely punting and usually deploying on-side kicks instead of deep kickoffs, was announced as the 19th head coach in PC’s long football history at a press conference Friday afternoon at Bailey Memorial Stadium.

“I have a vision for the PC football program, and it’s really not that hard,” Kelley said after he was introduced Friday by PC President Matthew vanderBerg and Athletic Director Rob Acunto. “I want to com in, and I want to join in on what they’ve built so far. I want the players to understand that I want to facilitate the best for then on the field, off the field and in the future. . . . At the same time, we want to go out there and win games on the football field, but more than that we want to them to realize that they’re the most visable people at this campus because that’s the culture of the South — that’s just what it is, and so we want those guys to go out there and represent the school and their name and the program as well as it can be.”

Kelley arrives at PC from Pulaski Academy in Little Rock, Arkansas, where he won nine state championships with a 216-29-1 record in 18 seasons as head coach.

Kelley said he has championship goals for the Blue Hose as well — sooner than later.

“My goal is to win the Pioneer (Football League), and I don’t think that’s out of reach at all,” he said. “I want to make the playoffs and then next year, I want to compete for a national championship. I hope people don’t look at that and laugh too much because that’s fully what I expect us to do with the kind of players that I’ve got.”

PC finished 4-3 this spring in a season necessitated by the cancellation of the 2020 fall season due to COVID-19. It was PC’s first winning season since 2014, but was not enough to save former head coach Tommy Spangler’s job.

PC announced that it had fired Spangler less than 72 hours after the season ended with a 28-24 win at Drake, but gave no reason for the change at the top of the football program.

Spangler shepherded PC from the Big South Conference to the non-scholarship Pioneer league over the past four seasons. The last few players to have received football scholarships at PC are graduating this month.

“This is by far the most competitive search process that I’ve ever seen in terms of the quality and depth of candidates that we have interested in this position,” Acunto said, saying this was a “go big or go home” hire.

Kelley has reached a level of notoriety for both dominating Arkansas football at Pulaski Academy over the past two decades and for his data-driven style of play. His teams rarely punt regardless of down, distance or field position. He opts to deploy on-side kicks and rarely returns kicks or punts.

Kelley said he has always been “a numbers guy” and was a one-time accounting major in college, so when he began coaching he began researching same types of analytics famously used by Bill James in baseball, which led to the Oakland A’s “Moneyball” approach in the Major Leagues.

“It really opened a door to a different way of thinking than the traditional way,” he said. “Think about it, if you would have thought that riding a horse and buggy was the best way to get around, we would’ve never had cars. There’s always a better way than you thought. It just made me start thinking differently.”

NFL tight end Hunter Henry, who played for Kelley at Pulaski Academy, also sent a recorded video message to PC players and fans. Henry went on to win the Mackey Award given to the nation’s top tight end as a player at Arkansas before being drafted by the San Diego/Los Angeles Chargers.

“He’s a smart, smart football coach, and he’s going to have a plan to beat every single team,” said Henry, who signed this offseason with Belichick’s Patriots. “He loves that challenge.”

Kelley, 51, acknowledged that he could have stayed at Pulaski Academy and added to his legacy until retirement, but said a conversation with a long-time assistant coach led to him opening the door for PC.

“He goes, ‘where are we supposed to go?’ We’d won six of the last seven state championships, and we can’t go up,” Kelley said. We can only go down or sideways on the graph or down. It really made me think. It’s something that resonated with me.

“I’d like to show people that there’s a different way of playing football. I know it works in high school, and they said it wouldn’t. I think it will work in the college ranks, and, you know, time will tell. There’s some other challenges that factor in as well, but certainly, that’s a small piece of it.”