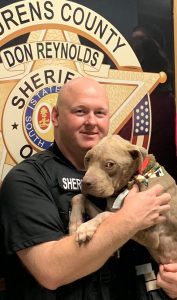 Laurens County Animal Control was recognized this past week for its efforts to rescue and humanely treat animals.

“This award I appreciate more than any of the others because it wasn’t an individual award,” Brown said. “I can’t do it without the teamwork of the entire staff, the sheriff’s office staff and the other agencies we work with. This is the first award that recognized the whole team.

Brown was formerly the head of the LCAC, but became a deputized sergeant when LCAC and the animal shelter came under the auspices of the Laurens County Sheriff’s Office. He was the lead investigator on a puppy mill case in Laurens County that resulted in the seizure of more than 270 animals in February of last year. It also led to the arrest of two people on animal cruelty and other charges.

Brown gave credit to everyone who works with animal control and at the shelter, saying that it is only the beginning when animal seizures take place

“It’s not over in a day,” he said. “We may take in 30 animals in a day or more, but we’re still dealing with emergency hearings, warrants and reports and all the extra stuff.”

Brown took over LCAC in 2017 and said then he wanted to change the culture of how animals are treated in Laurens County. To some degree, that has happened, he said.

“I think we’ve made head way, but none of this is an overnight change,” Brown said. “The biggest change is getting people in the community to say something if they see something, and we’ve been able to do that. I think people know now that if they call us and trust us, they can trust that we’ll do something about it.”

Staff at the LCAC has also undergone restructuring within the LCSO. Animal control officers, including Brown, were code enforcement officers. They were able to write tickets and call in deputies and investigators from local law enforcement, but their authority was limited. They were unable to make arrests.

Now, each animal control officer is a sheriff’s deputy with arrest powers.

“We’re able to see a case through from beginning to end,” Brown said. “We see it through all the way to trial. Before, we had to hand it off.”

LCAC remains busy and the shelter is often crowded. Brown works with rescue organizations to help rehome many dogs who arrive at the shelter. LCAC has saved more than 1,150 animals from inhumane conditions since 2019.

Shelter expansion and improvement projects are among the 16 Capital Project Sales Tax proposals approved by referendum during November’s General Election.

The work of the animal control staff and Brown has been lauded by other animal activists in South Carolina.

“Sgt. Brown is setting an example across our state of how Animal Control and the Judicial System can work together to do what is truly best for the victims of animal cruelty,” Dr. Kim Sanders with Anderson County PAWS told “Carolina Tails,” a publication of the Charleston Animal Society. “He works closely with the courts and shelters to increase awareness of state laws that allow these animals to be placed into homes rather than sitting in shelters.”

Brown said those comments from Sanders, who he considers a mentor, mean a lot to him.

He also said the current structure of animal control and the shelter under the direction of the LCSO and Sheriff Don Reynolds has been successful because of their involvement and cooperation.

“Along with that (restructuring) came the ability and the equipment to do our jobs and to do them more safely,” Brown said.