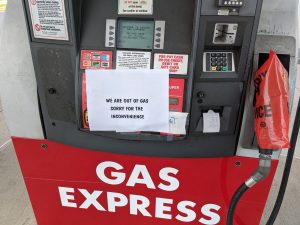 In Gas Express at Ingles in Laurens closed temporarily Tuesday after running out of fuel. The station reopened Wednesday morning.

South Carolina Gov. Henry McMaster says the Colonial Pipeline is expected to reopen by the end of this week, but Laurens County residents still made a beeline for the pumps this week.

The Colonial Pipeline, which shut down due to a cyber attack, supplies most of the gasoline along the East Coast, including the Carolinas and Georgia.

“My office has been in constant contact with the Office of Regulatory Staff regarding the temporary shutdown of the Colonial Pipeline and we stand ready to take any additional action that may be necessary,” McMaster Tweeted Monday. “Because our state is currently under a state of emergency, transportation waivers and price gouging laws are in effect to facilitate fuel delivery and protect consumers.

“There is no need to rush to top off your gas tanks or hoard gas – the pipeline is expected to resume operations by the end of the week.”

Despite McMaster’s attempts to quell fears of an actual gas shortage, gas stations around the county experienced long lines at the pump.

By Tuesday morning, the Ingles Gas Express in Laurens sat empty and was completely out of fuel. The Gas Express reopened with fuel priced at $2.59 per gallon for regular unleaded on Wednesday morning.

According to reports Tuesday afternoon, about 2% of South Carolina gas stations were out of fuel and about 20% in tourist destination Myrtle Beach were out of gas.

Industry observers say the shortages in the Southeast are being caused by “panic buying.”

The cyberattack on the country’s largest oil pipeline is believed to be orchestrated by a Russia-based group. The pipeline routinely carries more than 100 million gallons of fuel from Texas to New Jersey daily.

The shutdown has pushed Tuesday’s national average price of a gallon of gas to $2.985, according to AAA (the Automobile Association of America).

In Clinton on Tuesday evening, regular unleaded cost $2.99 per gallon at some locations.

In Laurens County, gas prices have risen steadily over the past couple of weeks, increasing by 20 cents per gallon at some locations.