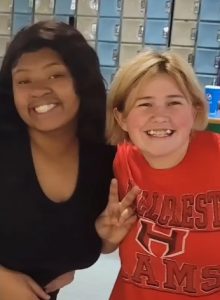 Jasmine Peake, left, and Madison Simmons were killed together in an ATV accident Thursday.

A vigil held Sunday evening in Joanna for the two teens killed in an ATV accident on Thursday shone a light on race relations as friends, families and the surrounding communities attempted to come to terms with their grief.

Jasmine Peake and Madison Simmons, both 14, died together when the ATV they were on was struck by an 18-wheeler on Milton Road in Joanna.

Friends and family members said at the vigil, though brokenhearted, that it was fitting that the two died together, “because God knew that one couldn’t live without the other.”

The vigil, which was arranged by the Impact 2 Purpose mentoring group that worked with both girls, was held at the Christ Central Ministry, just a few hundred feet from the site of the accident.

A makeshift memorial was placed at the corner of Milton Road and Pickens Street where the deadly accident occurred.

A few hundred people arrived for the vigil and lit candles as the sun began to set just below tree tops across Milton Road.

Quite a few wore t-shirts created in memory of the “BFFs” known as “Maddie” and “Jazz.” 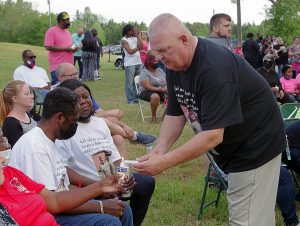 The t-shirts featured a photo of the girls dressed alike in camo with the words, “God made us best friends because he knew our moms couldn’t handle us as sisters.”

The t-shirts came in black and white – fittingly.

Peake was black, and Simmons was white, but none of that ever mattered to them, even in a world so often defined and divided by race.

Speakers, including Simmons’ grandfather, Ricky Posey, Sr., said the two girls simply never saw skin color, and their friendship should be a guide for everyone else. He implored the Joanna community to pull together as they did.

Rhonda Gary, who worked with both girls as part of Impact 2 Purpose, said that lesson could and should be learned from the girls’ friendship.

“These kids didn’t care if one was white and one was black – they just loved each other,” Gary said.

Gary said there was one other lesson – and it is for social media users – that needs to be learned in the wake of the tragedy. 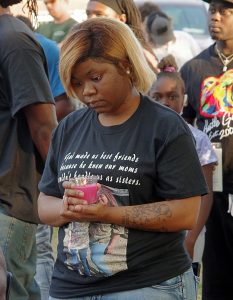 Mourners honored the two accident victims with a vigil Sunday in Joanna.

“Nobody should find out their child is dead on Facebook,” Gary said.

In the minutes following the accident, social media posts began to appear with photos and videos of the accident scene, some of them graphic.

They made the rounds throughout the community – to other friends and classmates of the girls and eventually to their families before being deleted.

All of the media arrived at light speed, before the Laurens County Coroner’s Office could notify the families of the girls.

For Laurens County Coroner Vickie Cheek, it was frustrating and made a difficult day for her staff even harder.

“The Coroner’s Office deals with tough situations almost every day, including having to notify family members that their loved one has died in an accident or from a crime,” Cheek wrote in her own Facebook post. “One thing that makes our job more difficult, is when family members learn of a death from social media posts and photos first. PLEASE people…THINK about how your family would be affected. When a family finds out about a death on social media, it’s very impersonal and obviously a shock. The Coroner’s Office works diligently to get in touch with next-of-kin as soon as possible. Please think before you speak.”