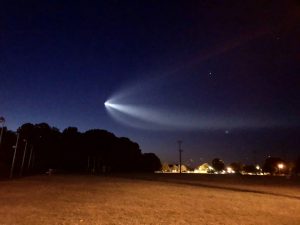 Clinton High School teacher Laura Fox was out for her usual morning run Friday when a bright light appeared in the sky overhead.

It may sound like the beginning of a pulp science fiction novel from the 1950s featuring creatures from outer space in flying saucers, but the light in the sky was much more science than fiction.

There would be no close encounter of any kind.

Fox captured several photos of what she now knows is the SpaceX Dragon capsule after it launched from Cape Canaveral, Florida with her iPhone just before 6 a.m. as she ran a familiar route at Presbyterian College.

“I was running through PC by the athletic practice fields, and I had no idea what it was,” said Fox, a 2009 PC graduate and biology teacher at Clinton High. “I didn’t know about (the launch), but it was pretty cool, though.”

Her morning run was nearly completed, so she went straight home and turned on television news with her husband and found out about the SpaceX launch. The rocket was transporting a crew to the International Space Station.

Four astronauts from three countries were aboard the flight for Elon Musk’s SpaceX company. SpaceX was using a previously flown rocket booster and spacecraft for the first time.

Liftoff for the flight had been delayed from Thursday afternoon until pre-dawn on Friday morning.

Early risers like Fox across the Upstate and all along the East coast were able to view the pale light of the rocket in flight for several moments as it climbed toward Earth’s upper atmosphere and into orbit.

Many of those who witnessed the rocket’s flight were photographers or space travel enthusiasts who knew the flight was on the schedule, but others were like Fox – on a morning jog or on the way to work – when the SpaceX rocket surprisingly appeared overhead.

“It’s definitely one of the craziest things I’ve seen on my morning run,” she said.