Clinton, S.C. – Teams of local and national-level developers spent Monday evening working to sway Clinton City Council to consider accepting their separate tentative plans for the purchase of a 40-acre tract of land on Hwy. 72 near the I-26 interchange.

One group offered a higher number of homes and another brought by Clinton residents presented a plan for fewer homes in “a subdivision worthy of the gateway into Clinton.” 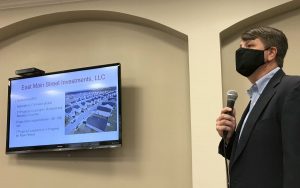 POTENTIAL DEVELOPMENT – Using a powerpoint at Clinton City Council’s Monday night meeting, Columbia resident Chris Seeby with East Main Street Investors, LLC. spoke about the 140 homes that he and homebuilder company Ryan Homes, would like to build on the city’s 40-acre lot near the I-26 interchange. Photo – Judith Brown

The presentations were the result of a request by city council in March to learn more about the potential development of the city-owned property. As of mid-March, council had heard only that East Main Street Investments LLC, working with home-building company Ryan Homes, planned to put as many as 140 homes into the 40 acres. This week, developer Chris Seeby and Ryan Homes representative Dave Hagan said the numbers were not solidly determined.

“We haven’t gone through the design phase. There are plus and minus 140 lots,” Seeby said, explaining that the homes would be separated by 15 feet.

“Our business model is unique,” Seeby said. “We don’t sell spec homes,” adding that Ryan Homes would build several model homes that prospective buyers could tour and make decisions on which of the four styles they prefer.

“We are going to have a great-looking product here,” Hagan told council. “We think this product and those who buy it are really going to live well in this community.” 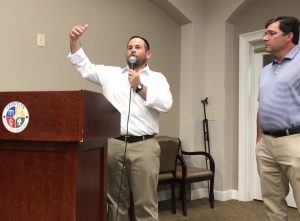 CITY GATEWAY – Clinton resident and engineer Joseph Dyches explains about the mix of home styles, sizes and prices offered by Creekside Village, LLC, presented by developer and Clinton resident Chip Cooper, right. Cooper said  it meets the needs of a wider range of homebuyers and inclusion of greenspace adds beauty along the Highway 72 Gateway. Photo-Judith Brown

Another presentation was made by Chip Cooper of Creekside Village, LLC, with fellow Clinton residents engineer Joseph Dyches and Clinton realtor Susan Tallman. They presented what was described as a community-driven development that could offer a range of home styles and prices to better meet the needs of people who would like to locate in or relocate to Clinton.

“The heart of this 65-acres development will be preservation of existing and natural features and connectivity to the surrounding community,” Cooper said.

Plans call for a wider range of home styles, including some townhouse options at about $170,000, to about 30 entry-level homes still in the below to slightly above $200,000 range, and then larger lots which could be purchased for semi custom- or fully custom-style homes at costs which would be determined by the buyer.

Cooper plans to use his land and creek which flows from Miller’s Fork to serve as a connector to the natural trails that the City of Clinton has proposed. 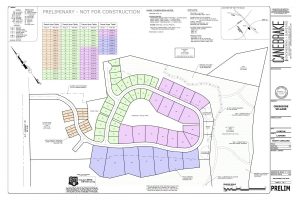 CREEKSIDE – Diversity in costs and home options shown in preliminary development plans by Creekside Village LLC, presented by Chip Cooper and other Clinton and upstate partners.

“And there’s some space for further development in the back in the future,” Dyches said.

“The gradient style of housing opportunities crosses bands of economic growth and position,” Cooper said, adding that much of the work could benefit the local community. “You have multiple builders right here in town. There are multitude of construction opportunities that can go well beyond one single builder.”

Tallman said as a realtor she serves people seeking all levels of homes, from townhouses to larger homes, and this subdivision would meet those needs within a single community with shared green space to further connections within Clinton.

Both sets of development teams stressed their plans were preliminary.

Interim City Manager Thomas Higgs said it’s very unusual to have a situation where a city has two good options for a single piece of city-owned property.

“This is a very unique situation,” said Higgs. “Because it’s city-owned property, council has to determine who will buy the property. Then after it’s purchased, the buyer will work up more concrete plans to present to the city’s planning commission, which would then work through it and see where it does and doesn’t meet city codes and make a report to council.”

This winter Clinton City Council passed first reading on the sale of the property to East Main Street Investments LLC.

Council opted in March to table the discussion, and then council members learned that Cooper had presented plans for the same property.

Council decided Monday, after a lengthy executive session, to table again the second reading on the sale of the property until later in April.