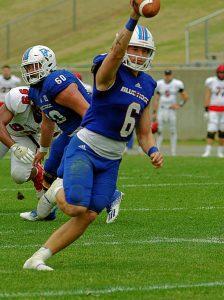 On the one hand there is victory — like Presbyterian’s 29-24 win Saturday over Davidson at Bailey Memorial Stadium.

On the other, there is redemption — for a Blue Hose team that had lost just three weeks ago at Davidson thanks to a quirk of Pioneer Football League scheduling in a shortened, COVID-influenced spring season and geography.

There is redemption for redshirt freshman kicker Jack Henegan, who missed to second-half extra points that kept the Wildcats within striking distance only to connect on a clutch 25-yard field goal with 1 minute, 49 seconds left in the game to hand PC a five-point lead, forcing Davidson mount an ill-fated touchdown drive to win.

Then, there is redemption for Rod Haygood, one of three remaining scholarship seniors on the Blue Hose roster who was flagged twice for pass interference as the Wildcats were on the move for that game-winning touchdown. Haygood intercepted Davidson quarterback

From there, the Blue Hose were able to run out the clock with victory in hand.

“These kids hung in there and kept believing and found a way to win,” said PC head coach Tommy Spangler. “That’s what I tell them all the time — finish the game, make a play on either side of the ball, and we did that.”
Haygood’s two pass interference penalties were part of a trio of interference calls that gave the Wildcats 45 yards and stopped the clock after each flag on their final drive. They reached the PC 23, but Haygood jumped a skinny post route by the slot receiver and was waiting for the ball when it arrived from Phelps.

It was the same route that drew penalties against Haygood on the two previous plays. 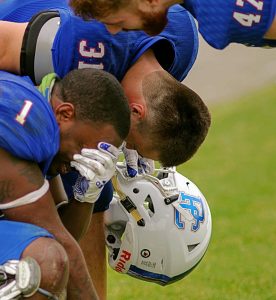 Senior Rod Haygood (1) is emotional following his interception that cemented PC’s win Saturday over Davidson. It was Haygood’s final home game at PC.

He did, returning it four yards, giving the PC offense just enough room to line up in victory formation and quarterback Tyler Huff to twice take a knee.

Haygood took a knee of his own on the sidelines, overcome with emotion as teammates hugged and congratulated him.
Davidson running back Coy Williams score on his second short touchdown run of the game to give the Wildcats a 17-14 lead with 8:06 left in the third quarter.

But history would not repeat itself. In the first meeting between the two teams, a 41-21 Davidson win, the Wildcats pulled away in the second half to make the score lopsided.

Senior wideout Keith Pearson, who finished with 11 catches for 114 yards and two scores, caught a 27-yard touchdown strike from Huff with 1:51 left in the third quarter to hand PC a 20-17 lead after Henegan’s kick failed.
PC’s defense got its third takeaway of the game when defensive lineman C.J. Tillman recovered a Dylan Sparks fumble at the Davidson 35 with 14:52 to play.

Six plays later, Huff capped the 35-yard drive, which included a 14-yard pass from backup quarterback Brandon Thompson to Haygood on a fake punt, with a 4-yard touchdown run and a 26-17 lead. Henegan, filling in for the injured Parker Maddrey, missed the extra-point try again.

PC kept the ball for the next five minutes, driving 68 yards on 11 plays to set up Henegan’s successful field-goal attempt.

“I thought about going for it there, but Henegan is a good kicker,” Spangler said. “I thought he could make it, and it was big. They had to score a touchdown to beat us.”

Game notes: Senior linebacker Colby Campbell recorded 25 tackles, setting a new PC Division I record for a single game. His three tackles for loss gave him 32 for his career, a PC record. The effort earned Campbell Stats Perform FCS Defensive Player of the Week and PFL co-Player of the Week honors. Campbell’s 25 tackles were the most in an FCS game this season. He joins defensive back Jeffrey Smyth as an FCS Defensive Player of the Week. Smyth won the award after PC’s April 3 win over Stetson. . . .  Huff went 21 of 25 for 198 yards on the day and completed his first eight passes. … Davidson receiver Satchel Moore caught all five of quarterback Tyler Phelps’ completed passes. . . . Spangler credited defensive back Oka Emmanwori for shutting down Davidson’s Dylan Sparks, who gained 126 yards rushing in the first meeting between the two teams this season. Sparks was held to 62 yards Saturday. . . . Junior running back Jarius Jeter scored his first touchdown of the season, tying the game at 7-7 with a 15-yard run with 5:23 left in the first quarter.

The Presbyterian football will end its season Saturday with the first meeting between the Blue Hose and Drake sandwiched between 16-hour bus rides to and from Des Moines, Iowa.

“It’ll be a challenge because it’s a long trip out there,” said PC head coach Tommy Spangler. “But if we can find a way to win this ballgame, it won’t be so bad coming back.”

Economics and COVID-19 played the largest roles in PC’s decision to bus the team out to Iowa for the season finale, Spangler said. Leasing a charter flight for the team would have been non-refundable and every sports schedule has been written in pencil during the pandemic.

Even though PC is not eligible for a Pioneer Football League championship and the Blue Hose are not a factor in league standings, the stakes are high for PC.

With a victory, PC would secure its first winning season since 2014 when the Blue Hose went 6-5 and only its second since joining NCAA Division I in 2007.

“They’re good on defense, and I think they’ve got some playmakers on offense,” Spangler said of the Bulldogs. “They’re hustling and tough, and they’re well-coached, and they’re getting us off a long trip and a little bit of a good win against Davidson.”

The Blue Hose, who are in search of their third straight victory, are coming off a 29-24 home victory over Davidson. Quarterback Tyler Huff led PC with two touchdown passes to senior wideout Keith Pearson and ran for another score. Huff operated PC’s short passing game efficiently against the Wildcats, completing 21 of 25 attempts for 198 yards.

The emotional win over Davidson could leave the Blue Hose primed for a letdown as they attempt to overcome bus lag in Des Moines.

“We could go up there and get our butts whupped if we don’t have our minds right, but I’m just the right guy to make sure that doesn’t happen as far as our attitude.”