Laurens will soon have a tap room, and brothers Wade and Wes Meetze have let the historic downtown building dictate both the style and the name of their planned tap room, Palmetto Brothers Dispensary.

The tap room is set to open in early May at 115 W. Public Square in what for many years was The Hummingbird Cafe and prior to that, Hugheys on the Square.

But the building dates back to the late 1800s, and as they’ve dug into its past, Wade Meetze said the history of the architecture and the former tenants began to take on a large part of their plans. The interior’s rustic brick and plaster walls and detailed tile flooring are completely different from their original ideas for the new business. 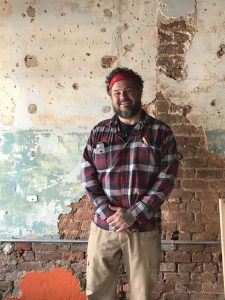 Wade Meetze, who with his brother, Wes, is creating Palmetto Brothers Dispensary. Photo by Judith Brown

Wade Meetze, from the Greenpond community, is an entrepreneur who’s started and still runs other businesses, and his brother, Wes, is a Simpsonville attorney. Through work and friendships, both have deep connections with Laurens County, and they loved the idea of contributing to the Historic Square in Laurens.

“We saw from the title the building is from the 1890s, and it was a dentist office and a pharmacy,” said Wade Meetze, who has taken on much of the renovation work.

Over the years, the space has also been a portion of the Sanitary Market grocery store, a jewelry store and a shoe store.

Dentists were the pharmacists of the day and their offices were called dispensaries, Meetze said, hence, the Palmetto Brothers Dispensary seemed a perfect name for their tap room.

The first thing the brothers wanted to do was completely open up the space.

“We gutted the whole building and we found all this history,” Meetze said. 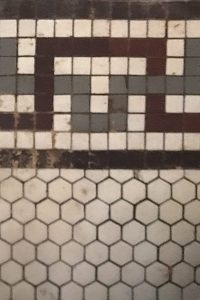 Intricate flooring from the early 1900s was discovered underneath layers of later floor coverings. Photo by Judith Brown

Clearing out four layers of flooring revealed an intricate tile floor from the early 1900s, and when a stucco finish was removed from interior walls, Meetze found not only original brick and plaster, still painted in colors from former tenants, but also proof that the original floor had been much higher than its current street-level height.

Removal of the dropped ceilings brought yet another surprise because pressed copper, which had been painted white, was still intact on much of the ceiling. What they could salvage has been repainted to show its copper origins.

The discovery of so many historical details was a pleasant surprise, and completely changed the course of the tap room.

“When we first decided to do this, we had done drawings and had all these plans of what we were going to do, but when we got into this and saw what was here, we threw those plans out the window,” Meetze said. “We want to honor the history of the Square and all the people who ran these businesses in the past.” 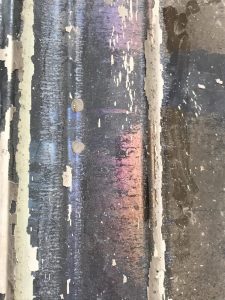 Copper ceiling tiles discolored with age and paint were discovered above the dropped ceiling. Photo by Judith Brown

open, and when Palmetto Brothers Dispensary opens in early May, they’ll be offering about a dozen different regional and local craft beers of all varieties, and wines by the glass. While there are no plans to reopen the kitchen anytime soon, that option is  a possibility in the future.

As businessmen, Meetze said, Laurens was the perfect city for this project.

“We want to target markets that are underserved,” Meetze said. “The city’s been great to work with and we want to highlight all that’s great about staying local.”