Laurens, S.C. – After canceling most of its 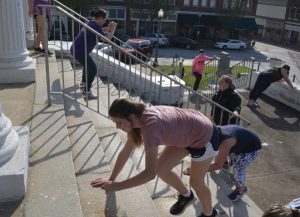 The Finally Friday two weeks ago brought in more people than some of the businesses and restaurants had even expected, and last Saturday morning’s first Moving on Main saw 25 or 30 people participating in the free cardio, agility training and yoga classes, which took place all over the Historic Courthouse grounds, parking area and even the courthouse steps.

“Both of these events have shown that as a community we are ready to start doing some activities outside again, and that we can handle them, because even though we had a good group of people, they seemed to keep at safe dis- tances,” Irick said.

He also added that those who had won scratch-off prizes during Finally Friday have until August to turn them in. 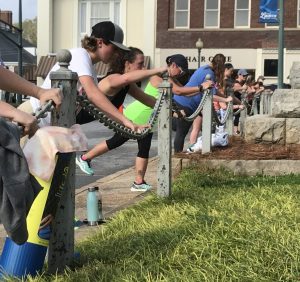 During Finally Friday, Carly and Trae Satterfield were heading home after a Friday dinner out on March 19 and stopped in to see what the activity was about. They said they’d never been to a Finally Friday before but planned to come again.

Billy and Tony Butler of Greenwood were back with their daughter and a friend, having been to hear bands at pre-pandemic Finally Fridays, and they bragged that The Coffee Roost was better than any Greenwood coffee shops.

Irick said that support of independent businesses is a primary reason the City of Laurens and Main Street are encouraging restaurants and businesses to remain open late starting this weekend as “Friday Night Live” begins this week, Friday, April 2.

“We are calling this a non-event event because we are not bringing in specific programming, but rather letting it grow organically,” Irick said.

He said if enough businesses participate, eventually Laurens can be known as a city where people know they can come on any spring or summer Friday night and find plenty of businesses open.

The success of Moving on Main Saturday mornings is important as well, Irick said, because it shows the importance of partnerships in a city.

“We are partnering with the YMCA, and it’s really the Y that’s running it and bringing in their instructors,” Irick said.

He said he heard from participants that they appreciated the fact they could come and work out and meet people at classes which were free of charge.

Participants went at their own paces while Laurens Family Y instructors Merry Chandler and Lauren Franklin lead the 9:30 a.m. group in a variety of agility training exercises. That included taking advantage of the Historic Courthouse steps and ledges for part of the workout.

“This is for all body weights and all levels, and we are teaching things that they can do at home,” Franklin said. “It’s agility work that’s really great for people of all ages because it keeps the hips and knees and ankles happy and helps with balance. And at home you can incorporate more full body weight exercise when you take advantage of stairs, or do pushups on countertops and the arms of couches.”

The Moving on Main classes are for anyone who wants to come participate, said Main Street Board member Elizabeth Able. The cardio and agility training begins Saturday at 9:30, and yoga is at 10:15.