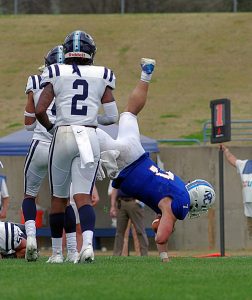 Presbyterian QB Brandon Thompson flips into the end zone for a fourth-quarter touchdown Saturday during a 24-21 loss to San Diego. 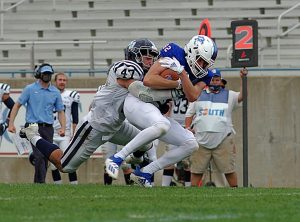 The Toreros (3-0) won their 41st straight Pioneer League game, capitalizing on Presbyterian miscues and holding off a fourth-quarter rally for a 24-21 victory Saturday at Bailey Memorial Stadium.

San Diego led 24-7 before a pair of fourth-quarter touchdowns, including an 80-yard touchdown pass from Brandon Thompson to Lawson Bachelder with 41 seconds to play cut the lead to 24-21.

Thompson, playing in place of starter Tyler Huff due to COVID-19 protocols, threw for a career-high 323 yards with a 75-yard touchdown to Keith Pearson along with the 80-yard score to Bachelder. Thompson also scrambled for a fourth-quarter score from six yards out with 1:52 to play.

Pearson finished with a career-best 155 receiving yards, and Bachelder added 98 to go with his first career touchdown catch.