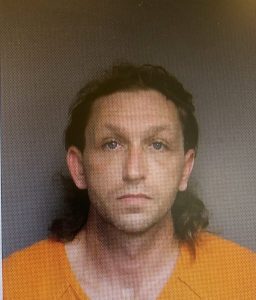 Laurens, S.C. – Laurens Police are still searching for a suspect involved in a Thursday morning car crash on East Main Street in Laurens.

Laurens Police Chief Chrissie Lattimore said officers are seeking Kenneth Redkey, who attempted to elude police around 10:30 a.m. He crashed into a utility pole and fled the scene on foot.

Police were attempting to arrest Redkey on stalking and harassment charges, Lattimore said. He is now also charged with reckless driving and failure to stop for blue lights.

The LPD released a mugshot of Redkey, but he is now bald so his appearance has changed significantly, Lattimore said.

Anyone with information Redkey and/or his whereabouts are asked to call the Laurens Police Department at 864-984-3532.