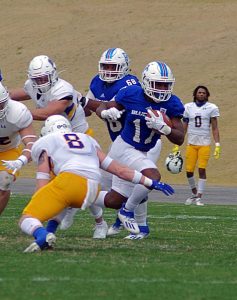 Redshirt freshman Delvecchio Powell II ran for a game-high 104 yards and a first-quarter touchdown on 26 carries to lead the Blue Hose (1-1) to victory in their first game in the Pioneer League.

Meanwhile, sophomore quarterback Tyler Huff threw for 211 yards and two touchdowns as PC jumped out to a 24-3 halftime lead. Huff also ran for 71 yards and a touchdown. His two touchdown passes — both in the third quarter — came on a 4-yard connection with Dylan Thibault and from 65 yards out to Matthew Rivera, who finished with four catches for a team-high 116 yards.

Morehead State (0-2) trailed 31-3 before adding a pair of touchdowns in the final minute of the third quarter on a 50-yard pass from quarterback Mark Pappas to wideout B.J. Byrd. Byrd turned in a game-high 148 yards on seven catches. Pappas connected on 20 of 45 passes for 248 yards and two scores.

See Wednesday’s Advertiser for more complete coverage from Saturday and a look ahead at Davidson.