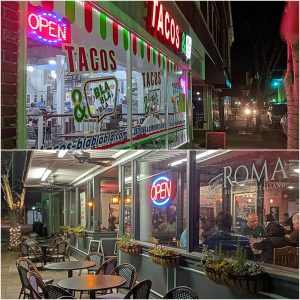 Restaurants in downtown Laurens and other retail businesses are looking to keep people in town with new hours and options.

Business owners across the state breathed a tenuous sigh of relief recently as Gov. Henry McMaster rolled back restrictions brought on by the COVID-19 pandemic.

Gone were the limits on crowds of more than 250 people. Masks no long have to be worn in government buildings or in restaurants, and establishments can now serve alcohol past 11 p.m. once again as the “last call” orders were repealed by McMaster on March 1.

Though some local ordinances remain in place in municipalities around the state, McMaster has whittled away at the few restrictions that have remained. South Carolina imposed some of the fewest restrictions for the shortest amount of time at the beginning of the pandemic about a year ago.

Still, some businesses suffered, while others adapted in order to survive, both statewide and locally. Others fell by the wayside, even after surviving recessions, “economic downturns” and changing trends and tastes.

Some with the entrepreneurial spirit have chosen to take a chance by starting businesses during a stormy business climate. Laurens County Chamber of Commerce President and CEO Amanda Munyan reported to her board recently that 17 new businesses joined the Chamber during the first half of the 2020-21 fiscal year.

“We did not see a huge decline (in membership) in comparison to previous years,” Munyan said. “During 2020, and I believe that that is based off of businesses, seeing the value of the chamber and still continuing to strive to be as successful they could, even during such challenging times.”

Munyan said some businesses did not renew their memberships, but the number was relatively few, and some of those may have chosen to not make the financial commitment necessary for chamber membership, but are still open for business.

“Some are having challenges financially because a lot of people took a huge hit during 2020,” she said. “But we’re continuing as an organization to promote our ‘think local’ social media efforts around everyone, not just chamber members. We’re aimed at supporting all small businesses, regardless of whether they’re members or not – just the overall economic well-being of Laurens County. What’s good for all is good for our members as well.”

While some businesses have struggled, real estate has continued to thrive and several agents have joined the chamber, Munyan said. Financial and other service providers have also joined the local business community.

As COVID-19 vaccine availability continues to rise and restrictions brought about by a pandemic that has killed more than 500,000 Americans fade into memory, Laurens Mayor Nathan Senn is making a push to keep his “We’re open for business” slogan mean what it says to local business owners on the Laurens historic square and beyond.

With “last call” restrictions now in the past, restaurants on Laurens’ square such as Roma and Tacos and Blah Blah Blah have announced nighttime hours. A taproom is being built in the former Hummingbird restaurant location on the square’s west side.

In addition to Main Street Laurens’ Finally Friday! events, Senn is promoting businesses on the square – restaurants and retail – as an after-hours destination for locals, who may have rediscovered an affinity for Laurens during the pandemic. Soon, he hopes an influx of housing developments in the city limits will lead more people to discover Laurens.

“A major part of it in my mind is providing a safe place for young people to gather,” Senn said. “It’s sort of perplexed me that there have been folks who question whether or not we should promote this kind of thing. All we’re doing is saying we have businesses that are here, and we’re asking that instead of going and spending your money out of town, stay and spend it here.”

The Midtown Building, an event and office space, opened as COVID-19 numbers continued to soar and hosted out-of-town restaurants who catered to welcoming crowds.

In Clinton, its downtown area lost a clothing store and Jitter’s Café. But locally owned Sadler-Hughes Apothecary closed its small, historic downtown location in order to move into a brand new, larger facility on Jacobs Highway to better serve its customers.

In January, Laurens lost an iconic business due, at least in part, due to struggles brought on by the pandemic.

The Hub, which had been in Laurens for more than 70 years closed its doors, quite possibly for good.

Laurens City Councilman Johnny Bolt said he can’t remember a time when The Hub was open – and wasn’t a fixture in Laurens. It routinely hosted the Laurens County Shrine Club, of which Bolt is a member, as the group planned its annual Shrine Race at the Laurens County Speedway over cheeseburgers. High school friends often got together to plan bigger reunions for their classmates.

“The back room” made The Hub the perfect gathering spot for those meetings.

“I’ve lived here all my life, and The Hub has always been here,” Bolt said, recalling teenage years and regular stops at The Hub and other late-night spots in Laurens.

For Laurens, it marked a pandemic-fueled sad end of an era.

“I said once that we would lose a piece of Laurens if The Hub ever closed,” wrote former County Administrator and local historian Ernie Segars in a column published by The Advertiser in January. “The Hub has closed; the community lost more than a business, and I am saddened by it all.”

Restaurants in downtown Laurens and other retail businesses are looking to keep people in town with new hours and options.