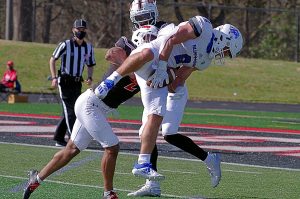 Presbterian WR Keith Pearson (2) makes a leaping catch Saturday to set up a score against Gardner-Webb.

BOILING SPRINGS, N.C. – Presbyterian appeared poised to end its long, strange purgatory between scholarship and non-scholarship college football Saturday with an exclamation point and a victory over former Big South Conference nemesis Gardner-Webb, which escaped with a 31-24 double overtime victory at Spangler Stadium.

PC took a 24-21 lead with 70 seconds to play in the fourth quarter. Redshirt junior offensive lineman Luke Foster, whose college career has coincided PC’s transition to non-scholarship Division I football even as the Blue Hose attempted to compete in the Big South against the likes of Gardner-Webb, celebrated with running back Delvecchio Powell II, who had scored the go-ahead touchdown.

“Yeah, baby,” he said, grabbing Powell, pointing and staring directly into a camera lens. “Look at the camera.”

Powell, who scooped a pass from quarterback Tyler Huff that ricocheted off of intended receiver Keith Pearson, and bolted into the end zone to give PC a 24-21 lead with 1:10 to play, did just that.

But there was too much time left for the Runnin’ Bulldogs, who had on the same field a week earlier embarrassed No. 24-ranked Elon, 42-28.

Gardner-Webb marched down the field, using 15 plays to set up a game-tying 37-yard field goal by Kurt Everett.

Everett had a chance to win the game after PC was held out of the end zone in the first overtime, but missed a chip shot.

Instead, Narii Gaither, whose 96-yard touchdown run straight up the middle handed the Bulldogs a 7-0 lead with 4:34 left in the first quarter, caught a 6-yard pass from graduate transfer quarterback Carlton Aiken in the second overtime.

On PC’s ensuing possession, Huff, who had completed 29 of 46 passes for 307 yards and two touchdowns and ran for another, was intercepted at the 1-yard-line to end the game.

Parker Maddrey’s 20-yard field goal at the end of the first half got PC on the board and cut the lead to 7-3.

Huff’s 1-yard touchdown run with 7:22 left in the third quarter again cut Gardner-Webb’s lead to 14-10. Colin Torres’ fumble recovery at the Gardner-Webb 8 yard line, set up an 8-yard touchdown pass from Huff to Pearson that gave PC its first lead of the game at 17-14 with 7:01 to play. Pearson finished with 10 catches for 133 yards, both game highs.

Meanwhile, Gardner-Webb stifled PC’s running game, holding PC to just 31 yards rushing and 5 of 16 (31%) on third down. The Blue Hose were also hampered by 13 penalties for 80 yards.

The game is PC’s first as a member of the non-scholarship Pioneer Football League and the first meeting between the two schools. PC is playing a six-game Pioneer League schedule but is ineligible for the conference title or its bid into the NCAA Football Championship Subdivision playoffs.

The Eagles (0-1) are coming off of a 52-0 beatdown at the hands of No. 2-ranked James Madison. The Dukes held the Eagles to 98 yards of total offense and nine first downs.