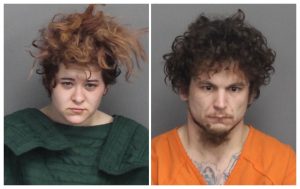 A daylong manhunt just outside of Laurens on and around LC Drive Thursday resulted in the arrest of two suspects who were allegedly driving a stolen vehicle when discovered around 6:45 a.m. by the Laurens County Sheriff’s Office following reports of a suspicious vehicle.

Charles Matthew Kelly, 29, of Boiling Springs and Kristin Brianna Bridges, 24, of Spartanburg were located separately near LC Drive around 4:45 p.m. and placed under arrest.

Apparent suicide on I-385

A Laurens County man apparently committed suicide Monday evening by jumping off the Metric Road overpass into traffic onto I-385.

According to the Laurens County Coroner’s Office, the victim was 49 years old from Cross Hill.

Traffic on I-385 near Exit 10 was tied up for several hours Monday night as investigators worked the scene.