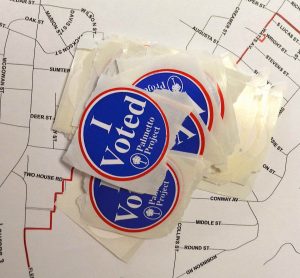 In Tuesday’s municipal elections, outlying towns in the county had several uncontested races, while campaigning had been strong for council seats within the cities of Laurens and Clinton, but incumbents held on in every race.

All vote totals were unofficial until they certified Thursday by the board of elections, said Laurens County Voter Registration director Lynne West.

“In municipal elections a candidate wins with 50 percent of the votes cast for that race plus one, so there were no run-offs needed,” West said.

In Clinton Seat 1, Danny Cook outdistanced his contenders, bringing in 114 votes against 14 for Ricky D. Martin Sr. and 3 votes for Henry Anderson.

“I am very pleased and thankful to all the voters who did turn out and voted in Ward 1, and I’m looking forward to working another four years for the City of Clinton,” Cook said.

The closest race of the night was for Clinton Seat 5 where incumbent Ronnie Roth, with 34 votes, narrowly won against Mitch Meadors who had 31 votes.

“I’m glad I won because in the last four years we have gotten so much started and I think it’s critical for continuity,” Roth said, adding that he was disappointed to see the low turnout. “But we have several million dollar projects going and it’s going to take a cohesive team to get it done.”

In Laurens, Marian “Blonde” Miller, the Laurens Seat 1 incumbent, won with 60 votes against her challengers, Joe Lovin with 31 votes and Phillip McClintock with 3.

“I appreciate the 60 people who voted for me, but I am concerned about the low voter turnout overall,” Miller said. “The city has to pay a lot of money to hold these elections and somehow we have to make people realize it’s important to get out and cast your vote.”

For Laurens Seat 2, incumbent Alicia Latrina Sullivan won with 79 votes, trailed by challengers, Wayne Neal with 25 votes and Faith Woodruff with one vote. Sullivan could not be reached for comment.

Keeping their seats were numerous incumbents who didn’t face opposition.

In the Town of Cross Hill, Mayor Randy Bishop won unopposed, as were the candidates for the four at-large council seats up for election – Charles Bartee, David Coleman, Connie Jester and Beverly L. Jones.

The Town of Gray Court race for the two at-large council seats was won by incumbent Millie Dawkins and Joy Neal Craine, who took the seat left vacant when council woman and Mayor Pro Tem Malea Merck, who has served for 24 years, chose not to run for re-election.

Commissioners Ulysses Cunningham from District 1 and District 2 Commissioner Gerald Abercrombie, both with the Laurens Commission of Public Works, were also unopposed in their races.