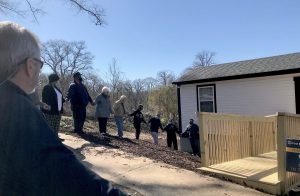 A partnership between Upstate church congregations and the love and assistance of friends and family culminated in a prayerful dedication service last week for a new home for Bill Stephens.

“It’s perfect,” Stephens said following the time of prayer. “It’s all I need.”

Stephens had not been as confident on April 13 when he was awakened early in the morning hours by a large tree which had fallen on his kitchen. It was the only significant damage in Laurens from an early morning storm which sent a large tree into the kitchen and back part of the family homeplace where Stephens had lived his entire life. 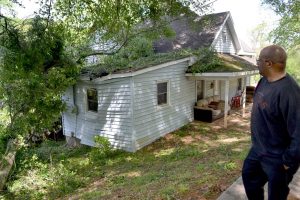 “When it first started, I didn’t know what I was going to do,” said Stephens following the short dedication service, where dozens of people held hands and prayed for God’s blessing over Stephens and his new home. “It’s been a long journey and I thank God and I’m thanking all these people involved in this.”

Stephens said he’s seen old friends come alongside him during the ordeal, and he’s made new friends in unexpected ways. In the first days following the storm, Stephens was staying with his brother Randy in Clinton while Chris Flegas, his former boss from the Pete’s No. 9 restaurant in Laurens, was trying to shore up the kitchen. Word had gotten out about what Stephens was going through, and long-time friends and people he didn’t even know began showing up to help in any way they could.

“Bill is family for us,” Flegas said, “and when something like this happens, you help your family.” 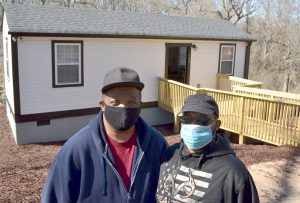 Friends had posted a Facebook post asking for help and a GoFundMe page was set up, drawing the attention of the Missions Committee at First Baptist in Simpsonville. The committee tries to help with providing housing several times a year, and there were funds and volunteers ready to help Stephens.

With the extent of the damage and the age of the house, it became clear that it would be difficult to save the home, and Stephens and his siblings had to make the hard decision to allow the house to be taken down and replaced with a much smaller home.

“That was a really hard decision,” said Stephens’ brother, Randy.

The children were raised there, and it had been in the family for three generations. The brothers met with their sister, Patrina Stephens.

“That was really hard but it was the best thing to do,” Randy said.

Meanwhile, Laurens native Russell Hill, who’s on staff at First Baptist Simpsonville, said they reached out to friends at First Baptist Laurens, who came on board to help with funding and work.

“It fit into the missions program we were trying to do,” Hill said of the Simpsonville church’s outreach effort, “and the timing was perfect.”

A contractor within the Simpsonville church built most of the small home within his shop, and volunteers from both cities did the finishing work after it was moved to Stephens’ Jersey Street property.

The city worked with them to assure that codes were met, and many days, while Stephens was at work with the dining department at Martha Franks Baptist Retirement Center, volunteers came in, finished up all the work and readied it for Stephens.

He’s been in his new home for close to three weeks now.

“When you walk down the street, you might think you meet a stranger, but I have more friends than I ever realized,” Stephens said. “I couldn’t ask for better friends.”