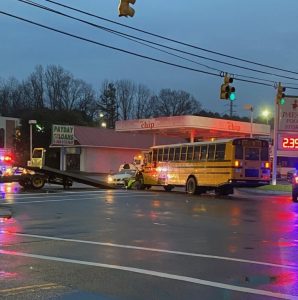 A wrecker prepares to load a Pontiac G6 after an accident early Friday morning with a District 55 school bus. Children were not yet on the bus.

A Laurens County District 55 school bus had not yet picked up  children when it collided with another vehicle early Friday morning, and now the Laurens Police Department is investigating the identity and whereabouts of the driver of the involved vehicle.

A passerby called dispatch at 6:06 a.m on Friday, Feb. 19, and officers arrived to find that the driver of the white Pontiac G6 was no longer on the scene, said Laurens Police Department Capt. Heath Copeland.

“The bus driver said he saw the person walk away, and he thinks it was a male,” Copeland said, explaining it was not yet light.

The only person on the bus was the driver, Copeland said, because the school bus driver was on the way to begin the route. The bus driver was not injured.

“They both had green lights but the bus failed to yield right of way in making the turn, so the bus driver is at fault,” Copeland said. “When found, the driver of the other vehicle will be charged with leaving the scene of an accident.”

Now the focus is on the department’s investigation to seek the identity and location of the driver of the vehicle.

“The reporting officer found no blood to indicate a major injury,” Copeland said. “And there is no indication the car is stolen.”

Just before 7 a.m., a wrecker arrived to begin loading the unattended vehicle.

Look for updates in the Wednesday, Feb. 24 issue of the Laurens County Advertiser.