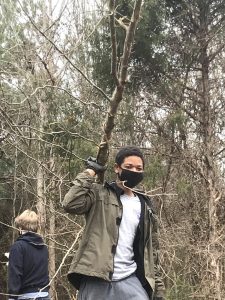 College students braved chilly temperatures on a recent Saturday morning to haul branches and small trees out of the rough-hewn section of the Swamp Rabbit Trail, which had been partially cleared by the Laurens County Parks and Recreation Department.

“We had to change our Martin Luther King Day of Service so we were happy that some of the students were willing to come out,” said Rev. Racquel Gill of the PC Chaplain’s office.

Gill worked with Student Volunteer Services co-directors Hallie Keisler and Noah Burkett to get the word out among students and student groups.

“We had sign up sheets and talked it up,” said Keisler. “Due to COVID and the student athletic schedules, we knew we weren’t going to get as many as we have in the past, but it was still a good turnout.” 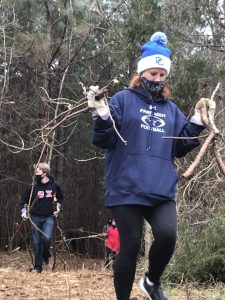 Many were individuals who signed up with SVS, while most of the Theta Chi fraternity filled in the ranks.

In addition to those working on the trail behind the Prisma Health Laurens County Hospital, there were also groups working at the current Habitat for Humanity house in Clinton, and at the non-profit Laurens County Humane Society.

Faculty and staff from PC were also working at the trail, including Provost Dr. Don Rayber, who was grateful for Gill and the work of the stu- dents.

“They are doing a terrific job to come out on a cool morning to make a difference,” Rayber said. “It honors Dr. King’s legacy and lives out the college’s motto, ‘While we live, we serve.’”

Others working to clear the trail included members of the non-profit Laurens County Trails Association, Chamber of Commerce staff and county officials, including County Council Chairman Brown Patterson, a PC alumni who said he was happy to see the students come out.

Prisma has donated some of the funds for the Laurens County section of the Swamp Rabbit Trail, and volunteers Saturday also included hospital staff, including CEO Justin Benfield who was using his chain saw to take down small trees left in the path. 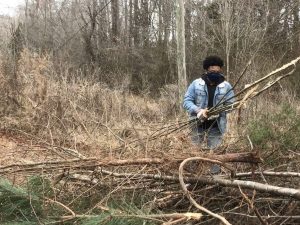 The passage of the Capital Project Sales Tax referendum will allow the county to complete the first section of the trail, and the trails association has Prisma to thank for a portion of the funding that’s already gone into the trail.

Funds from the referendum will go toward paving the trail which has already been cleared, and Prisma funds will contribute to signage and other aspects of the trail.

“It’s important. It’s going to encourage people to get outside and exercise,” Benfield said, “and ultimately means a healthier Laurens County community.”