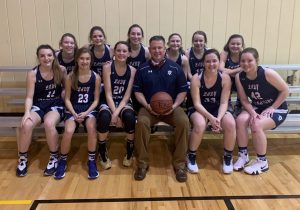 The Laurens Academy girls basketball team got a delayed victory at Anderson Christian Tuesday night that put the Crusaders in familiar territory – the SCISA Class A state playoffs.

With the 45-28 win, which was spurred by Payton Breen’s 16-point performance and 15 from Elissa Hucks, the Crusaders also delivered head coach Jason Marlett’s 150th career victory as LA’s head coach. Marlett is in his seventh season at LA and has led the Crusaders to a pair of SCISA state championships to go with four region tournament titles and three region regular-season championships.

In addition to Breen and Hucks’ scoring surge, Sarah Grace Natiello scored six points against Anderson and Rylee Ballard added eight for the Crusaders. Freshman point guard Olivia Huck, who was named to the all-region team, did not play against Anderson after suffering a concussion.

LA jumped out to a 16-7 lead in the first quarter and led 26-16 by halftime. The LA defense held Anderson scoreless in the third quarter.

Kristian Peppers led Anderson with 15 points, nine of which came in the first half.

The regular season-ending game had been rescheduled from earlier in the season due to COVID-19 precautions.