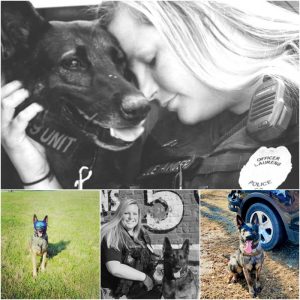 Anya was humanely euthanized at Clinton Animal Hospital with her handler, LCSO Deputy Amanda Alexander by her side and members of both the LCSO and LPD standing vigil outside after losing her battle with canine lymphoma.

The procession made its way from Laurens to Clinton. Anya, a Belgian Shepherd who would have turned 7 in March, began suffering seizures and recently lost the use of her hind legs. She was carried into the animal hospital draped in a “Thin Blue Line” American flag.

“Our condolences to Deputy Alexander and her family. Job well done, Anya,” a release from the LCSO read. “Thank you for your service.”

Anya began her law enforcement career in 2016 as a member of the Laurens Police Department, working as a NNDDA Narcotics Detection K9. She retired due to her illness on July 23, 2019, but her health continued to decline.

Friends of Alexander and local law enforcement offered their sympathy and support on social media.

The LCSO’s K-9 Unit was raising money last April to purchase and train a dog to replace another retiring K-9 deputy, Diesel, a bloodhound, before Anya’s medical retirement. The K-9 units for the LCSO and LPD have routinely assisted in drug detection and seizures as well as tracking criminal suspects and missing persons.

According to the LCSO, it cost about $12,500 to purchase a dog, train both the dog and handler in order to receive the necesary law enforcement certifications to join the force.