Published on Page 1 in the Feb. 17, 2021 issue of The Laurens County Advertiser.

Clinton. S.C. – The general manager and the chairman 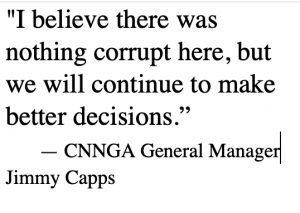 of the board for Clinton Newberry Natural Gas Authority on Tuesday defended the natural gas agency against accusations made in recent articles by The Post and Courier, claiming they don’t believe funds spent on training workshops over the years to be unethical.

General Manager Jimmy Capps was hired by the board in August 2020 to replace long-time General Manager Stan Bryson, who had been with CNNGA for almost 42 years. Clinton Mayor Bob McLean this past fall rotated into the position of Chairman of the Board, alternating with Newberry Mayor Foster Senn who had been serving as chair. 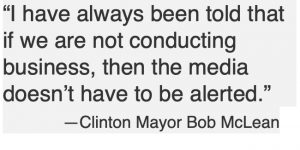 “From my standpoint, no, there has been nothing unethical based on the information I’ve looked at,” Capps said.

Capps did acknowledge that the CNNGA attorney is looking into the possibility that the agency has violated the state’s Freedom of Information Act.

“Based on my knowledge, I don’t see it as unethical to have these training sessions, though if we have erred in regard to the FOI, then we will verify that and put those protocols into place,” Capps said. “Even though it is not a business meeting and no action is taken, we are already working through plans to publish the meeting minutes and alerting the media.”

McLean said he also was unaware that FOIA laws were violated all those years as board members attended the retreats.

“I have always been told that if we are not conducting business, then the media doesn’t have to be alerted,” McLean said. 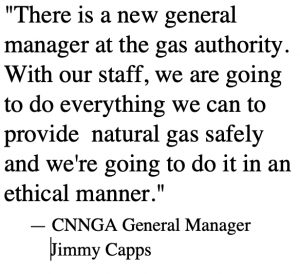 FOIA stipulates if there is a quorum present, then it is deemed a public meeting and the public needs to be informed. In one of the Post and Courier stories, Jay Bender, the attorney for the South Carolina Press Association, expressed his concern.

“I see a violation in every one of those meetings,” Bender said, “and I see serious possibilities of ethics violations as well.”

COVID prevented any such excursions by the CNNGA board in 2020. Capps said it was his understanding that the annual retreats have been held at resorts which were selected each time based on the fact that unpaid engineers and speakers were brought in to provide training for board members, who are also unpaid, and that board members did not make those decisions as to locale.

The Post and Courier’s investigative pieces outline numerous examples of illegal activities among some officials in South Carolina cities and towns. The story about the five South Carolina natural gas authorities, however, reveals trips which are not considered illegal, but rather excessive spending for what are considered annual training workshops.

The five natural gas authorities were established in the 1950s to provide natural gas service to rural communities across the state. The plan was for the agencies to contribute profits to their respective cities, and the Post and Courier story noted CNNGA has contributed $9.3 million to the cities of Clinton and Newberry over the last 10 years.

Some of the other agencies have taken trips which cost in excess of $100,000 to locations such as Stowe, Vermont, or Portland, Oregon.

McLean said he had no idea who had spent the money at the boutique.

“My wife went on the trip with me but we do not shop at boutiques. And I have never been privy to picking a place for the retreats,” said McLean. “I see no difference between that and the South Carolina Municipal Association going to a nice place. But the industry speakers are also unpaid and so we bring them to a nicer place as a reward to coming to do the training.”

McLean said there was a local news article 10 or 12 years ago before he was elected to city council about an expensive CNNGA trip, but he had heard no complaints since that time or in the eight years he’s served.

The reported total cost of the five years’ worth of CNNGA trips, travel expenses, meals at or after meetings, gifts and other expenses investigated by the Post and Courier were $337,000. That correlates with the budget that Capps said he presented to the board this fall.

Based on previous year’s budgets, Capps said the current budget allotted $70,000 for all the board and staff training for the year. It includes meeting locations, meals, gifts and travel expenses for board members, who do not receive a salary but rather per diem for travel, Capps said.

In addition to McLean, currently the other members of the board include Clinton City Council members Danny Cook and Gary Kuykendall, Newberry Mayor Foster Senn, Newberry city council members David Dubose and Lemont Glasgow and an at-large member from Newberry.

Monthly meetings have changed since COVID, Capps said, because the board rooms at the offices are too small to social distance. Still alternating between the two cities, the board meets in a large area at no cost in Newberry, but with a lack of large meeting spaces, it has been renting the Cotton Loft in Clinton for its monthly meetings and meals.

Capps clarified, however, that he doesn’t think the board ever had a say in where the trips were to be held.

Travel funds “do not come from the portion of the budget that impacts the rates,” for its 13,000 customers, Capps said.

Another concern raised in the Post and Courier story was the free installation of the discounted natural gas appliances.

Capps said that all 53 employees, “from the general manager to the pipe fitters,” can purchase the appliances at cost and installation is free in their homes, and that is the policy across the board.

“These are perks for all 53 employees,” Capps said, “not just the board members.”

McLean said that, in addition, appliance costs for all CNNGA customers are drastically lower than the same appliances at retail stores. The CNNGA appliances are sold at only a small percentage above cost, McLean said, and customers are allowed to finance the cost without interest charges because they can apply them to their bills over a full year.

Capps, who came in during COVID and has not attended any of the CNNGA board’s trips, said he thinks the attention will bring about some changes.

“It’s all in the eye of the beholder as to what is considered extravagant,” Capps said. “But, obviously, I think you would have a hesitancy to do that in the future.”
Capps said the new leadership might have come at a good time.

“There is a new general manager at the gas authority,” Capps said, referring to himself. “With our staff, we are going to do everything we can to provide  natural gas safely and we’re going to do it in an ethical manner.”

Capps still said he felt there was nothing done which was unethical.

“I believe there was nothing corrupt here,” Capps added, “but we will continue to make better decisions.”