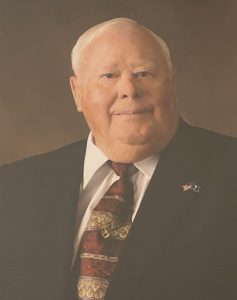 James Cork Martin, 93, of Gray Court, SC, passed away on February 9, 2021 at PRISMA, Greenville Memorial Hospital. He was the widower of Ruby Compton Martin and Carolyn Tollison Martin.

James was the son of the late Wallace Lever and Lula Cork Martin. He was co-founder, along with his brother Horace, of Martin Brothers Construction Company, Inc. Some highlights of James’ life are: 1961, he and Horace were named Young Farmers of the Year, Served SC Farm Bureau Federation Dairy Division Board from 1972-1986, President of SC Dairy Association from 1985-1986, appointed by the governor for two 3-year terms on the SC Dairy Commission from 1983-1989, managed 350-acre farm of beef cattle and inducted into the Dairymen Hall of Fame at Clemson University.
James was a member of Bramlett United Methodist Church, the Shrine Club, Outdoor Club of Laurens, Laurens Investment Club, Laurens County Farm Bureau Board, Farm Bureau State Board of Directors, State Water Board, Beaverdam Warrior Creek Watershed Board, Laurens County Transportation Board Vice-Chairman and a 70-year member of Wallace Masonic Lodge #49.

A private service will be held at Bramlett United Methodist Church in Gray Court, Friday, February 12, 2021, conducted by The Reverend John Fahrney and Mr. Jerry Williams with Masonic Rites.

In lieu of flowers, memorials may be made to Bramlett United Methodist Church, 2043 Bramlett Church Road, Gray Court, SC 29645.