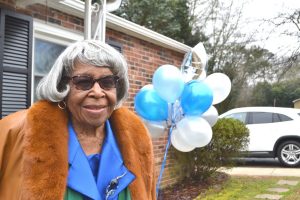 Bessie Johnson celebrated 100 years of living as she turned 100 on Sunday.

Laurens, South Carolina – On the cusp of Black History Month, an entire neighborhood came together last weekend to honor one of their own who has experienced 100 years of history in Laurens County.

Bessie Johnson didn’t know about the big plans which were being made to celebrate her birthday Sunday afternoon, honoring the cen- tenarian on her birthday, Jan. 31, 2021.

Members of the Washington Heights Community, students with Bridging the Gap and the District 55 Hype Team joined repre- sentatives from the City of Laurens Fire Department and Police Chief Chrissie Latimore in following a path of silver and blue balloons put up by more than 20 students from the Bridging the Gap and Hype Team facility which is located right in Johnson’s neighborhood.

The balloons began early on Park Place and marked the path to her Truman Street home, where her large bay window and even her kitchen were filled with more than 100 birthday cards, with more arriving throughout the week.

Many more than 100 cards came to Bessie Johnson over the past week.

“Calvin Whitmire with Bridging the Gap called and wanted to do something, and Callie Burnside also was behind it,” said Johnson’s daughter, Izora Adamson, who kept the event a secret from her mom until Sunday afternoon arrived and she was told to dress up in her bright blue suit.

“I didn’t expect anything,” Johnson said. “It was a real surprise.”

Johnson said her life has been well spent in Laurens County.

She was born to parents who had come into the marriage with five children each. Eventually the couple had 13 more children together, and Johnson was the eldest of that set of children.

“There was not another family for three miles,” Johnson said. “We were farmers – cotton, corn and everything you could find. We worked hard but no one went hungry.” 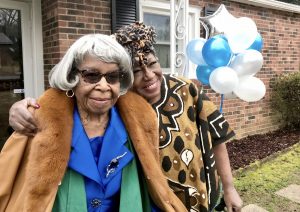 She married her sweetheart, Thomas Johnson, and eventually had her daughter Izora.

“I was a school teacher and he laid concrete,” she said, referring to her husband, Thomas Johnson, who passed away in 2000.

“Later we moved to Laurens and we built this house.”

Early in her teaching career Johnson taught fifth grade for a couple of years in Cross Hill, then she spent the next 38 years teaching sec- ond graders at Pleasant View School in Gray Court, including one year when she taught her daughter.

“Only one year, thank God,” she said, smiling and teasing her daughter. “You haven’t taught school ’til you’ve taught your own.”

Johnson loved teaching those young children during her 40 year career.

“I think it’s the best work, teaching second grade,” Johnson said. “They love you to death, and every day they’d be scrambling to see who was going to sit closest to me at lunch.”

But as far as her favorite lifetime memories go, those go way back to her fun days as a country girl, and she’d still go back if she could to the time she could do whatever she wanted outside.

“I loved to climb a tree and shoot a squirrel from the top of a tree,” Johnson said, laughing.

And Izora laughed too, admitting that her mother had done things she had never done.

“We honor God for blessing her these 100 years,” Izora said of her mom.