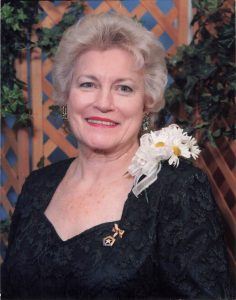 Jean Davenport Duckworth, age 91, went to be with her Lord and Savior on Friday, February 5, 2021, at Martha Franks Baptist Retirement Community in Laurens, SC.

Born on May 7, 1929, in Abbeville, SC, she was a daughter of the late James Marion Davenport and Myrtle Anderson Davenport. She was predeceased by her husband Troy Thomas Duckworth, Sr.

She was a member of the First Baptist Church of North Augusta. Her career included owner of Pro Real Estate and Insurance, The Insurance Mart and The Vogue Ladies Shoppe. She previously worked for the Medical College of Georgia and the Executive Assistant to the Director Personnel and as Assistant in Administration at Reigel Textiles where she also played on their semi pro basketball team. She was a 53-year member of The Golden Glow Chapter of the Order of the Eastern Star. She was member of the following organizations: Strom Fellowship; North Augusta Board of Realtors; Rivers Edge Sertoma Club; Elks Aidmore Society; American Legion Auxiliary; Beta Sigma Phi; University of South Carolina Alumni Association; American Businesswomen’s Association; North Augusta Chamber of Commerce; and a Volunteer at National Healthcare and Charles Norwood Veterans Hospital.

Jean was graduate of Greenwood High School Honors Program where she played basketball and a graduate of The University of South Carolina.

Services will be held at 3:00 PM, Sunday, February 7, 2021, in the Mausoleum Chapel at Greenwood Memorial Gardens conducted by the Rev. Dr. H. Lawton Neely.

The family will receive friends at the cemetery immediately following the committal service.

The family is most grateful to Rev. Dr. H. Lawton Neely, the administration and the staff at Martha Franks Baptist Retirement Community for their kind, loving, faith-based care shown to both Mrs. Duckworth and her family.

In lieu of flowers, memorials may be made to Martha Franks Baptist Retirement Community, 1 Martha Franks Drive, Laurens, SC 29360.