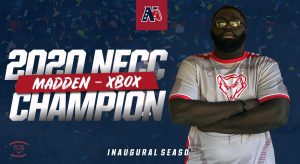 “Mozart” turned in a 21st-century classic.

“I’m always looking for new opportunities, and the esports program was offering new things,” Mosley said. “I just wanted to represent my college.”

His virtual one? Not so much.

With playing football for the Wolves no longer an option, Mosley was left looking for a team, and when Newberry began its esports program back in 2019 under coach Terrence Knock, Mosley found it.

“I just love the camaraderie and everything that came with it,” Mosley said of team sports. “That’s one of the biggest things with it. I got injured in camp and started to really thing that maybe I have a bigger purpose right now. With me getting hurt, maybe it was time to put this time into something else.”

Mosley had only started playing Madden, the popular NFL-based game, about three years ago, but he advanced quickly to a collegiate championship level once Newberry started its program.

Mosley, who won the Madden title playing the defending Super Bowl champion Kansas City Chiefs, said he and his teammates put in the practice time to compete in Madden and other video games on the NECC esports docket, which also includes titles Overwatch and League of Legends.

From there, like a physical football Friday night at LDHS or Saturday at Newberry, Mosley said it came down to following the gameplan.

“I don’t think it was pressure packed at all,” he said of the Madden championship. “I set a goal for myself and knew I could accomplish my goal. I just had to execute.”

Mosley’s title comes as esports is gaining a foothold in colleges across the country, growing exponentially with area schools such as Erskine, Lander, Newberry and others starting programs and offering scholarships to potential competitors.

“I feel like (esports) gives a lot of validity to gaming and makes people understand how important and how real it is,” Mosley said.

Madden, which has been around as a gaming heavyweight since 1989, also has professional tournaments that draw the best players from around the world who vie for prize money. The 2020 Madden Club championship paid $100,000 to the winner. Last year’s Madden Bowl had a total prize pool of $750,000.

Mosley, a senior at Newberry, said that is where he would like be someday – playing against the best Madden players from across the globe.

“Honestly, that’s been my dream – to take what I do now and turn it into a real career,” he said.