See full story in the Wednesday  Jan. 27 issue of The Laurens County Advertiser 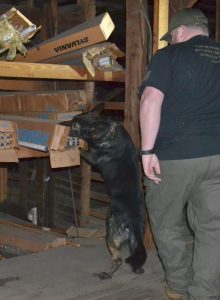 Laurens, South Carolina – As part of a large-scale training program, K-9 officers and their handlers from five different Upstate police departments spent Monday and Tuesday searching through office space, storage areas and the property outside the former Todd Distributor building.

“We normally train on Monday and usually participate with Fountain Inn, but we try and do these big ones with more departments at least quarterly,” said Laurens Police Department K-9 Training Coordinator Sgt. Doug Jones. “The goal we have is to practice tracking, narcotics, handler protection and vehicle searches, and to cover it all we extended this one to Tuesday.”

This week’s training sessions brought two or three K-9s and handlers from
each of the city police departments in Laurens, Lyman, Wellford, Fountain Inn and Inman.

The dog’s age, its experience as a certified K-9 officer and time working with its handler determines how quickly the dog can accomplish its task, Jones said. Some of the dogs are veteran K-9 officers and others still have yet to be certified.

Luca, an experienced black German shepherd with Lyman Police Officer Will Van Pelt, was upstairs in the dark storage area of the historic Laurens building searching for packaged narcotic samples, or  “hides,” as they are called. 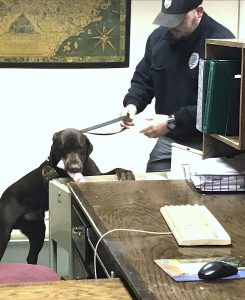 Luca first found a jar of marijuana located high on a shelf, and then found a sealed package of heroin wrapped in a towel inside a box.

After each successful find, the dog was given the prize – a toy ball that he and the officer could play with for a short time as a reward for his efforts.

Laurens Police K-9 Officer Aries, a chocolate lab, is still in training under Police Officer William Reid, so his tasks were simpler, with rolled marijuana-scented towels located almost nose level on shelves within an office.

“We get the samples from the Federal Drug Enforcement Agency,” Jones said. “It’s a special program for K-9 training across the nation.”

The dogs have to be certified in many areas, however, and that’s why the training lasted two full days this time. Within their own departments, handlers and dogs also occasionally work with each other’s K-9s to increase the familiarity in case the need arises, but these quarterly training sessions working with handlers from numerous police departments are invaluable.

“We all benefit,” Jones said, “because everyone has different things to bring to the table and different levels of knowledge.”