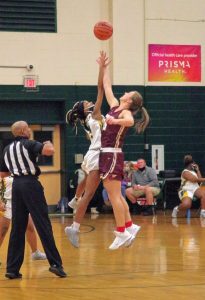 The LDHS varsity basketball teams will try to squeeze eight games into the next 16 days after missing nearly a month of the season due to COVID-19.

The next two weeks will be busy on the court for the Laurens District High varsity basketball teams.

After postponing their entire January schedule leading up to Friday night due to COVID-19 concerns, the Raiders were to resume competition in Region 2-4A Tuesday, hoping to squeeze in eight conference games in 16 days.

“We’ve got basically two weeks and two days to play eight region games,” said LDHS Athletic Director Tommy Spires. “It’ll be busy, but I think our kids are just happy to be able to play and compete.”

With COVID-19 cases spiking dramatically in Laurens County and across the Upstate after the Christmas and New Year’s holidays, District 55 officials made the decision to go completely to e-learning and to shut down its winter sports schedules.

At that point, the LDHS varsity boys team (2-7) had played nine games and barely gotten into its region schedule. The girls varsity team (0-3) had played just three games due to several postponements and cancellations in December, all of them related to COVID-19.

While LDHS sat idle, continuing to practice without games to play, the rest of Region 2-4A carried on as scheduled.

Spires said the upcoming schedule is packed with three games per week over the next two weeks and then back-to-back contests to close the season on Feb. 8-9, but it’s doable barring another setback due to the pandemic.

“If we have a team that has to quarantine because of a positive case or any other thing, then that team will most likely be done for the year with the current protocols that are in place,” he said. “I’m hoping to get through the next to weeks with no incidents.”

LDHS was to start out at Greer Tuesday night and at Greenville tonight (Wednesday) before returning home Saturday against Greenwood beginning at 6:30 p.m.

Meanwhile, the LDHS wrestling team is set for dual matches at Greer tonight and at home against Greenwood Thursday at 6 p.m. The Region 2-4A Tournament is set for Saturday at Eastside where the top teams will qualify for postseason state tournaments whose fields have been shaved in half by the South Carolina High School League.

Despite the hiatus on competition, Spires said LDHS players and coaches have stayed true to the course, continuing to work and taking precautions so they would have a chance to resume their seasons.

“It’s been difficult, but I’ve been really impressed with our kids and our coaches and how serious they’ve taken doing their part,” he said. “The kids have been responsible on campus with coming to practice and in the community, and I think that excitement they have just to play is going to carry over into the games.”