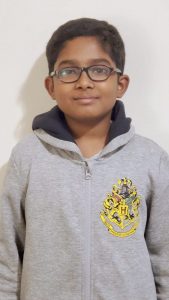 “With the pandemic we had to cancel all our usual activities,” said Sanders alumni member Elma Morrison, “but we had several children participate in the essay contest and all four of them read their essays on live radio last Saturday morning, which was an educational experience for them as well.”

Each of them received cash prizes as well.

Not having the children in school and being unable to be in touch with the English teachers made it harder to get more participation, Morrison said, but Bridging the Gap and HYPE director Calvin Whitmire spread the word to many of the middle school HYPE students, and Alfred is the HYPE leader at Laurens Middle School, Whitmire said.

Several other HYPE students were on hand to assist as the children read their essays on the radio.

In their essays, Morrison said, the students did a great job explaining why they felt it is still important to celebrate Martin Luther King Day each year.

“History remembers him as one of the most influential leaders who have ever walked on this Earth,” said Daniel Alfred in his essay. “His efforts helped reshape our society and change the attitudes of people. Dr. King has certainly set the course of history and mankind in the right track through his selfless deeds. I am sure that future generations will be inspired by him.”

It’s exactly the reason that the Sanders Alumni Association continues to offer the MLK essay contest each year, Morrison said.

“We gave them certificates and pizza and they read their essays on the radio, because our aim is to keep his legacy alive,” Morrison said of Dr. King. “We don’t want it to turn into just another holiday so we are trying to keep it in front of children. We hope that one day when they are older, they’ll hear more about Dr. King and say, “I remember. I did an essay about him once.”