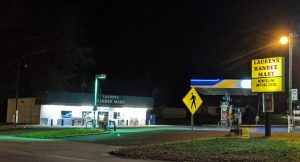 The Laurens Handee Mart was robbed at gunpoint Monday evening.

Laurens Police are seeking two suspects in an armed robbery that occurred Monday afternoon at the Laurens Handee Mart at the corner of Church Street and Anderson Drive.

Officers responded to a call from the convenience store around 5 p.m. Monday.

“They presented a gun and requested money from the cashier, who obliged,” Lattimore said.

The suspects, who are described as a white male and a white female, fled with an undisclosed amount of cash, but little else is known as investigators continue to search for clues.

Investigators have so far been unable to identify a make and model of vehicle used by the suspects through video footage and witness interviews or determine the direction they traveled after leaving the store.

“Our investigators continue to actively pursue leads,” Lattimore said. “We’re hoping we will have more information to release soon.”

No one was injured during the robbery.

Anyone with information or security video footage in the area is asked to call CrimeStoppers at 864-68CRIME to leave an anonymous tip. Persons can also call LPD Detective Sgt. Billy Sellars at 864-984-3532.