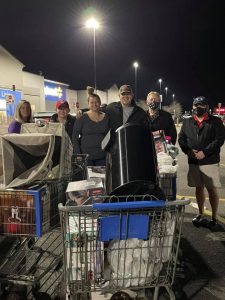 New Year’s Day is normally a day filled with hope for a coming year, but for a local law-enforcement couple the holiday turned tragic.

Clinton Police Officer Cody Heithold and fiancé Mary Moss, who works with the Laurens County Sheriff’s Office, and son Eli lost everything in a house fire.

“We are having to start from the ground up,” Moss posted on Facebook the day after the fire. “We have been so blessed by the outpouring of love and support from the community and especially our work departments Clinton PD and Laurens County Sheriff’s Office.”

Since then, the local community and the Deputy Roger Rice Ride On Fund has pulled together to help. More than $6,000 has been raised on a GoFundMe page set up for the family.

Moss wrote that the entire house quickly filled with black smoke during the early morning of Jan. 1. Soon, the home would be engulfed in flames and the couple lost everything. Heithold was working, but Moss, Eli and the family dog escaped unharmed.

“I grabbed what I could from the living room and left everything we owned inside,” Moss wrote.

The Deputy Roger Rice Ride On Fund is a local nonprofit dedicated to helping first responders and their families in times of need. The fund was started by the family of LCSO Deputy Roger Rice, who was shot and killed in the line of duty in 2011.\

“There’s not enough I can say about the Roger Rice Fund and everything they do for law enforcement,” said Clinton Police Chief Sonny Ledda. “They help send folks to training, they provide anything they can for law enforcement and their families in need. They go above and beyond, and we truly consider them part of our law-enforcement family.”

Ledda said he was relieved that no one was injured or killed in the horrific fire, and that the Roger Rice Fund has been “a Godsend” for the family.

Anthony Furino, executive director of the Deputy Roger Rice Ride On Fund, said the group pitched in to help as soon as it could, planning a shopping trip to Walmart for essentials to make sure the family had everything it needed.

“We reached out to Chief Ledda and the Sheriff’s Office and figured out what we needed to do,” Furino said. “We always try to stand by our first responders.”

The fund has faced challenges of its own as belts tightened locally due to COVID-19 and the ensuing economic turmoil.

Furino said fundraising was down about 60% in 2020, but a $5,000 grant helped the fund get through the tough times this past year.

The Roger Rice Memorial Ride is the fund’s primary fundraiser each year, but other plans had to be put on hold during the pandemic. A golf tournament and other events are planned for 2021, he said.