enable Laurens to serve as a “surge unit,” but he said that already “the situation with COVID is real. It’s dire.”

The Prisma Health Laurens County Hospital has been classified as a “surge unit,” so it’s working to add an additional 29 beds and the medical personnel to staff the new areas.
“I know that we’ve had some things to pop up in the news and social media, and we are obviously in our second surge of COVID,” Benfield said.
The 90-bed-hospital had already been under a strain from high numbers of cases in June and July, Benfield said, “then we began seeing effects of 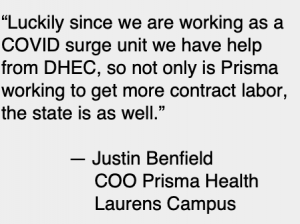 Thanksgiving in the first week of December. As we approached Christmas holidays, the numbers began to far exceed the initial surge we saw in the summer.”
During a press conference with health officials and the mayor of Greenville a couple of weeks ago, Benfield said the Prisma Health Laurens Campus had been named as one of the locations which would serve as a surge unit for patients in the Upstate of South Carolina.
“We are opening up the third floor for that,” Benfield said.
The third floor is divided into two sections, with 15 beds in the older pediatric, medical and surgical area, and 14 beds in what was formerly the skilled nursing wing of the hospital. The beds are being upfitted to meet current DHEC standards. 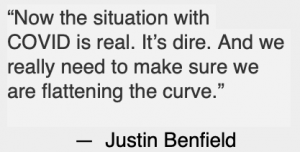 “DHEC has given its approval with a waiver to expand those for patient care so we will be adding 29 beds,” Benfield said, noting that at least the first 15 beds should open by mid-January, “and we are working with DHEC and the South Carolina Emergency Management Division and trying to staff that unit.”
Because it is an alternate care site, Prisma Health Laurens Campus will be accepting patients from Prisma and other health care facilities as space allows.
Until those newly-approved beds open, however, there is no additional space.
“We are definitely challenged with bed placement within the hospital,” Benfield explained. “The situation is very tough and we are doing our best. We do have a few patients holding in the Emergency Department and as soon as we let patients go home, we fill those beds up.”
Benfield said he understands that everyone is tired of the pandemic.
“We’ve been talking about hand washing, social distancing and staying away from groups and being smart,” Benfield said.”We have been doing this now for a year and our physicians and nurses are tired, but now the situation with COVID is real. It’s dire. And we really need to make sure we are flattening the curve.”
In answer to a question about vaccines, Benfield said that as of Thursday afternoon180 of the team members have received the first dose of vaccine.
“That’s about 60 percent vaccination rate, which is really good. There are 245 more scheduled over the next two weeks,” Benfield said. “Some of those are hospital staff and others are community partners which qualify for the first round vaccines.”
The bottom line right now, Benfield said, is that it’s imperative that the local hospital gains more staff.
“We are working as hard as we can to get contract labor but it’s a net sum zero,” Benfield said. “So we are looking to take care of more people with the same resources. Luckily, since we are working as a COVID surge unit, we have help from DHEC, so not only is Prisma working to get more contract labor, the state is as well.”
Posted in Breaking News, News and tagged Clinton SC, Clinton South Carolina, covid, holiday surge, Laurens County Hospital, Laurens County SC, Laurens SC, Pandemic surge, PRISMA, Prisma Health care, South Carolina, Surge Unit