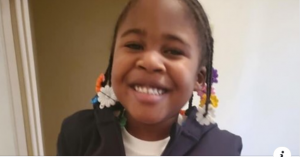 As State Fire Investigators sifted through the ashes at Landau Apartments in Clinton late Sunday evening, a child’s car seat sitting in the parking lot in front of the fire-torn building served as a reminder that so much more was lost.

The blaze, which destroyed an entire eight-unit building within the apartment complex and displaced 15 people, killed a 4-year-old girl who was asleep upstairs in one of the apartments. The victim was identified as Madison Jeter. According to the Laurens County Coroner’s Office, an autopsy Monday determined the child died of smoke inhalation.

Clinton Fire Chief Phillip Russell said in a release that fire crews knew a child was trapped inside one of the apartments when they arrived on the scene just before 6 a.m., but they were unable to get to her because of the flames.

“Clinton fire crews made multiple attempts to gain access to the second floor, into the apartment where the reported person was entrapped,” Russell said. “However, fire conditions were so bad, fire crews had to transition into exterior defensive attack.”

“In all my years of firefighting the early morning fire in Clinton was extremely tough emotionally and physically,” Plaxico wrote. “The feeling of hopelessness was overbearing once we confirmed a child was still inside. I watched multiple firefighters give it all they had to get this burning monster under control. Fearless, bravery, hardworking, teamwork are just some of the words I would use to describe them.”

Because a death occurred in the fire, investigators from the State Law Enforcement Division (SLED) and State Fire Investigators were on the scene Sunday as crews also worked to clear debris around the unit.

A GoFundMe page has been set up to help defer funeral expenses for Jeter.

Donations to help the families affected by that fire and a mobile home fire in Joanna that displaced a family with four children over the weekend are being collected by several agencies, including the American Red Cross, local law enforcement and churches among others. Monetary donations can be made directly at Arthur State Bank in Clinton.