LAURENS, S.C. – The City of Laurens has planned a 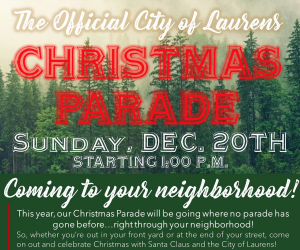 new Christmas Parade for this Sunday afternoon, and rather than heading straight down West Main Street, the route will include neighborhoods throughout the City of Laurens.

“The City of Laurens Christmas Parade is going where no parade has gone before,” said Mayor Nathan Senn.”This year, every city is celebrating the holidays a little differently due to the safety concerns of the pandemic. But, where there is a will, there is a way.  And, though it will look quite different, Laurens will still have its parade!”

The City of Laurens has organized a neighborhood parade to avoid such crowds, Senn said. 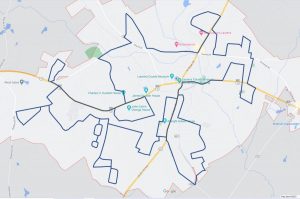 The parade route, in blue, travels through or near most of the city’s neighborhoods.

Approximate “neighborhood-by-neighborhood” times will be announced prior to the event on the City of Laurens Facebook page.

The parade will begin at the Fire Station on West Main Street and wind throughout the city limits.

From the fire station, the route will wind through the neighborhoods west of 221 and South of 76; then

East into the Washington Heights neighborhood; then

North of E. Farley Street into the Sanders Middle School neighborhood; then

West of South Harper onto Irby Avenue and back to West Farley; then

North on South Harper to East Main toward Holmes Street and the old Laurens Mill neighborhood; then

West of North Harper through Clemson Street in the Watt’s Mill area; then

South on Hwy 221 to Hillcrest Drive to the Spring Street area; then

Returning west along West Main and the ending at the fire station.

Spectators may participate by coming out into their own yards or to the streets in their neighborhood along the parade route.  Those unable to view the parade in person or who want to track the progress of the parade as it reaches their area can view the event on Facebook Live through the City of Laurens’ Facebook page.

“We know that 2020 has been a difficult year for everyone, and sometimes the smallest things can bring the most comfort.,” said Mayor Senn. “ If there was a way to safely hold a small Christmas parade, we wanted to be creative and find a way to make sure our citizens had this special part of the Christmas experience.  By holding this year’s parade in this unique way, we get to have a little fun and do something we wouldn’t do normally, couldn’t do with the size of our normal parade, and likely may not ever do again.  But, aside from celebrating Christmas with our neighbors, this parade will be one more way we show the world our strength and determination as a community.”

Earlier in the fall, the City of Greenwood had been denied an exemption for its Christmas Parade by the South Carolina Department of Commerce, the department tasked with managing public functions during the pandemic. Then on Oct. 22, the City of Clinton received word that its request for a Christmas Parade was also denied, according to Main Street Clinton manager Adele Alducin. Jonathan Irick, director of Main Street Laurens which organizes the Laurens Christmas Parade, said in a story with The Advertiser  that with the Laurens parade route basically just like Clinton’s, with people crowded along West Main Street and the Historic Square, there was no doubt that it would also have been denied, so Main Street Laurens and the City of Laurens had opted against a traditional parade.

“This year, it won’t be the number of vehicles in the parade or the size of crowds that we remember,” Senn said. “Instead, we’ll remember that, against all the odds of this tough year, we pulled together to find a way to have a parade and look forward with hope for the new year.” 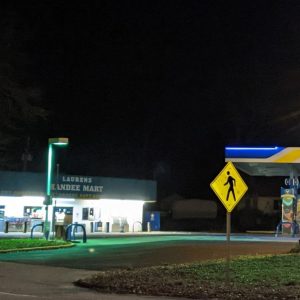