The long and arduous investigation into the execution-styled murder of a woman who was driven to and shot in rural Laurens County in 2017 culminated this past week with a sprawling 147-count indictment and charges filed in the largest federal racketeering conspiracy in state history.

The federal grand jury returned indictments against 40 defendants, including a Laurens man believed by authorities to have fired the gun that killed Michelle Marie Dodge, 27, of York in a wooded area on McDaniel Road in July of 2019. 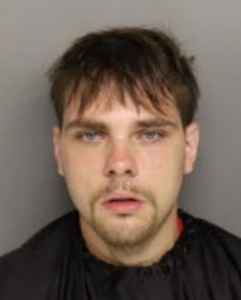 Jonathan Eugene Merchant, 27, of Laurens, is among those facing indictment under the conspiracy under the Racketeer Influenced and Corrupt Organizations (RICO) Act, a statute designed to eliminate organized crime and prosecute the racketeering activities of these organizations. Several of the crimes alleged in the indictment were charged under the Violent Crimes in Aid of Racketeering (VICAR) statute. Of the 40 defendants, 24 defendants were charged in the initial indictment in this case for conduct related to their alleged roles in the enterprise’s drug trafficking organization.

Merchant, also known as “Merck,” was also among four suspects charged in Greenville County this past July in the January murder on Old Grove Road in January. The drive-by shooting killed Jeffrey Mitchell Snipes.

The Laurens County Sheriff’s Office has maintained an active role in the multi-jurisdictional investigation since Dodge’s murder.

The initial investigation began in 2017, focusing on the Insane Gangster Disciples, an alleged branch of the larger Folk Nation gang. The case was investigated by the Bureau of Alcohol, Tobacco, Firearms and Explosives (ATF), FBI and the Lexington County7 Sheriff’s Department.

Investigators believe that James Robert Patterson, who was serving time for another murder at Kirkland Correctional Institute in Columbia, orchestrated both the Dodge and Snipes murders from behind bars using contraband cellphones to run the Insane Gangster Disciples criminal enterprise.

“This was a complex, multi-jurisdictional investigation aimed at taking down an alleged criminal operation of historic reach in our states,” said ATF Special Agent in Charge Vince Pallozzi.  “The brazen criminal acts charged fueled gun violence and drug trafficking in numerous counties and cities.  To shut down this alleged operation is a major win for public safety in South Carolina.”

The following defendants have been charged in the indictment for conduct related to their alleged roles in the RICO conspiracy and/or related crimes:

Every defendant charged in the RICO conspiracy faces the potential penalty of life in prison due to sentencing enhancements through IGD’s involvement in murders and significant drug trafficking. Additionally, the defendants charged with murder in aid of racketeering and kidnapping in aid of racketeering also face life imprisonment. There are additional penalties for those charged with firearms crimes, drug crimes, robbery, and assault.

In connection with the investigation, law enforcement seized approximately 40 kilograms of methamphetamine, more than 130 firearms, and various quantities of heroin and fentanyl.