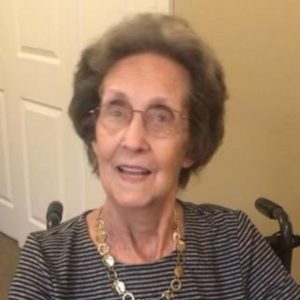 Born February 16, 1929 in Lanford Station, she was a daughter of the late Clarence and Grace Pearson Cooper. She was retired from Inman Mills.

Mrs. Dover was a life-long member of Patterson Chapel UMC.

She will always be remembered for her love of her family and placing them above herself always.

She is survived by her son and daughter-in-law, Norman G. Dover, Jr. and wife, Robin of Clinton; a daughter and son-in-law, Lynn Wilson and husband, Stephen of Oak Ridge, NC; her brother, Fred Cooper of Simpsonville; her sisters, Carolyn Satterfield of Woodruff and Martha Cooper of Lanford; grandchildren, Jared Wilson and wife, Desiree, Andrew Wilson, Trent Dover, Ryan Dover and wife, Sarah, and Aaron Dover and wife, Kristen; her great-grandchildren, Benjamin Wilson, Alexander Wilson, Cooper Wilson, Briar Dover and Timothy Dover; She also had many brothers-in-law and sisters-in-law, nieces and nephews.

In addition to her husband, she was preceded in death by her brothers, Tom Cooper, Henry Cooper and C.B. Cooper; a sister, Edna Holmes; and her grandson, Matthew Wilson.

Her grandsons will serve as honorary pallbearers.

If you plan to attend the service, the family asks that you respectfully wear a mask and adhere to social distancing guidelines. Due to COVID-19 the family will not be receiving friends or having a time for visitation.