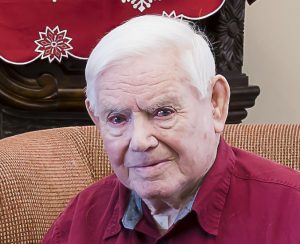 Born in Laurens County, he was a son of the late Lewis Harvey and Margaret Collins Russell. He was a member of Harmony United Methodist Church.

He was a veteran of the U.S. Army, World War II where he served in the Pacific Theater as a Medic Aidman. During his service he received several citations including Asiatic-Pacific Campaign Service Metal, The Bronze Arrow Head Metal, American Theater Ribbon, Philippine Liberation Ribbon and the WWII Victory Metal..

He was retired from Riegel Textile Co after 40 plus years. He was also retired from The Greenville News having been a local Newspaper Carrier for numerous years.

Graveside services with military honors will be held at 1 pm Tuesday at Greenwood Memorial Gardens with Rev. Bill Rogers officiating. Social distancing and mask are requested by the family.

The family will be at their respective homes and will receive friends from 2 to 6 pm on Monday at Parker-White Funeral Home. Mask and social distancing are required.

In lieu of flowers memorials should be made to Martha Franks Residence Fund, 1 Martha Franks Drive, Laurens, SC or to Harmony United Methodist Church, Box 150, Ware Shoals, SC 29692. Online condolences may be made at www.ParkerWhitePruitt.com.