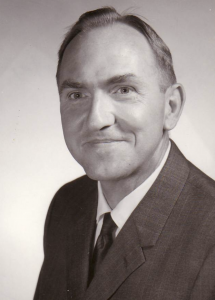 Dr. K. Nolon Carter, Ph.D., Charles A. Dana Professor Emeritus of Chemistry at Presbyterian College, died peacefully on December 5, 2020 at the La Plata Nursing Home in La Plata, Missouri, after injury and a short period of illness took him from his home in Kirksville on November 1. He was 95.

Dr. Carter was born October 2, 1925, in Columbia, SC, son of Kenneth Nolon Carter and Bessie Fowler Carter. He spent most of his childhood growing up in Due West, SC. As a young man of 17 during World War II, he signed up for military service in the United States Army Air Corps. Beginning active duty in the cadet program at 18, he was training to be a fighter pilot when the war ended. Returning to college, he graduated from Erskine College with a bachelor’s degree in mathematics and a strong concentration in chemistry. He then attended Vanderbilt University, earning his Ph.D. in organic chemistry in 1951. He taught chemistry at Presbyterian College (PC) in Clinton, SC, from 1951 until his retirement in 1987, much of that time as chair of the department. In 1973, he was awarded the Alumni Distinguished Teaching Award, reflecting both scholarship and concern for the individual student. The program at PC was especially known for its modern instrumentation and success in preparing future physicians. Several years into his time at PC, he was invited to come teach the summer organic chemistry course at Vanderbilt University, which he did for several summers.

One of the greatest blessings of his life occurred on July 7, 1954, when he married his wife Eugenia. They were spouses, friends, parents, fellow Christians, and dedicated colleagues in teaching science at PC. They were 100% supportive of each other, and their relationship blessed their family, friends, neighbors, and students. In 1986, they shared the Presbyterian College Board of Visitors Outstanding Service Award. Both of them enjoyed riding bicycles and playing tennis, and they played racquetball together in the mornings well into their retirement years. Nolon Carter had an abiding gratitude for his wonderful mother and his wonderful wife. Eugenia told son Kenneth many happy things, including that she had the best mother-in-law anyone could have had, and that she considered herself never to have met a man with more integrity than her husband Nolon, though there was perhaps one tie and of course many honorable mentions.

After retirement, Dr. Carter continued his research, and in 1995 was corresponding author on a paper, coauthored with his son, that was published in the Journal of Chemical Education. Also, subsequent to retirement, with his wife’s encouragement, he resumed flying lessons, becoming a private pilot more than 40 years after his first lessons with Uncle Sam. He flew as pilot in command of his Cessna 150, N5276Q, into his early 90s, short of his 93rd birthday. A happy event of summer 2020 was being taken up in the Cessna by his grandson Nolon, who had earned his license in his grandfather’s plane. They flew wearing masks, and with the windows open! Always safety conscious, Dr. Carter served for several years on the Laurens County Local Emergency Planning Committee (LEPC), before moving to Missouri.

Dr. Carter was a faithful member of Providence Associate Reformed Presbyterian Church in Clinton, where he was ordained as an elder and served for many years as clerk of the session. In 2003, he and his wife moved to Kirksville, where their son was teaching chemistry at Truman State University. In Kirksville, he was a regular attender at Grace Community Bible Church.

Nolon and Eugenia were avid readers who enjoyed a broad range, including local and regional newspapers, periodicals, the mysteries of Dorothy Sayers and G.K. Chesterton, the theological works of C.S. Lewis, and the humor of P.G. Wodehouse.

Dr. Carter’s wife died on Epiphany in 2008. He stayed in Kirksville in order to be active as father and grandfather to his beloved family. He is survived by his son Dr. Kenneth N. Carter, Jr., his grandchildren, Nolon Donald Carter and Rosemarie Eugenia Carter, of Kirksville, extended family, long-time friends Mrs. Brenda Stewart and Dr. and Mrs. Harold Hope in the Carolinas, esteemed former students and colleagues, fellow Associate Reformed Presbyterians, friends old and new, and his faithful cat Phi.

Respecting Dr. Carter’s wishes, memorial and committal services are being deferred until such time as the COVID-19 vaccinations have become widely available. COVID-19, acquired in a medical/health-care setting despite the best efforts of all concerned, ended his mortal days. Earlier in the evening of his passing, his son and grandchildren were able to sing him Christmas carols. All too many, though, have died without the touch or voices of family nearby. Well known for his concern for safety and for the well being of others, it was his strong desire to limit COVID’s further toll. He had a long and blessed life, and he wanted others to share in similar blessing.