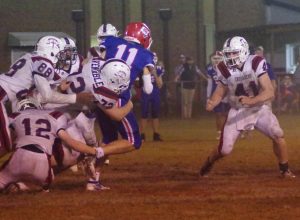 But truthfully, the fireworks had been going on since Holly Hill’s Zack Pelloni returned the opening kick 66 yards for a touchdown. The unbeaten Raiders jumped out to a 16-0 first-quarter lead and appeared poised to roll into next week’s championship game.

LA rallied back to tie the game at 16-16 with back-to-back long touchdown passes. Senior quarterback Thomas Lowry connected with Diamonte Grant on a 43-yard strike and then hit Cal Robertson for a 31-yard score.

Even down two quick scores, LA head coach Todd Kirk said neither he nor his team panicked. The outscored the Raiders 30-8 over the second and third quarters.

“We got hot there,” Kirk said. “But that’s a good football team over there, and I wish them the best. It was a hard-fought football game. … I had some guys who played their guts out – my seniors over there.”

Marion Breland handed the Raiders (11-0) a 24-16 halftime lead with a 2-yard quarterback sneak with 3:09 left in the second quarter.

But LA refused to go quietly into the foggy night.

Lowry found Robertson again in the opening minutes of the third quarter with a 51-yard touchdown pass. The score cut the Raiders’ lead to 24-22.

Minutes later, the Crusaders took the lead for the first time in the contest on a Lowry 12-yard touchdown run, which was set up by a 40-yard pass to Grant. Lowry connected with Robertson once again for the 2-point conversion and a 30-24 lead with 8:54 left in the third quarter.

But Holly Hill’s potent rushing attack and physical style took its toll on the raiders as the game wore on. Holly Hill tied the game at 30-30 on a 42-yard run by Breland with 2:27 left in the third quarter that was set up by a Lowry interception.

The Raiders defense forced LA to turn the ball over on downs and Breland hit Harley Watkins over the middle for a catch and run that went for 56 yards and a 44-30 lead. Holly Hill recovered a pooch kick on the ensuing kickoff with 5:24 to go and Breland scored from 11 yards out for a 50-30 lead with 5:17 left in the game.

The Crusaders ended their season with an 8-4 record. They were attempting to win their first SCISA 8-man championship since 2006.

The Raiders will play Richard Winn for the state title next Friday night.