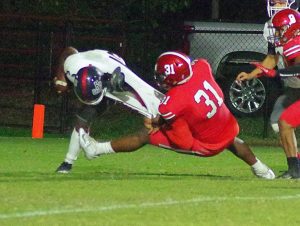 Clinton ended a frustrating week and possibly its football season on a high note with a dominant defensive performance and a 38-6 nonconference victory over Strom Thurmond Friday night at Wilder Stadium.

The Red Devils held the Rebels to just seven yards on the ground and intercepted quarterback Patrick Westbrook twice, doubling his interception total for the season.

Clinton’s stingy defense also held Strom Thurmond scoreless for the better part of four quarters before Westbrook connected with receiver T.J. West on a long touchdown strike with the game well out of reach.

Meanwhile, the Red Devils got all the points they really needed in the first quarter – from their defense.

Defensive back Bryson James recovered a Westbrook fumble in the end zone in the first quarter to give the Red Devils a 7-0 lead.

Later in the half, Clinton senior defensive lineman Marcus Chalmers tackled Devron Williams in the end zone for a safety and a 9-0 lead.

That was more than enough for the Red Devils (3-3), who held Strom Thurmond to 185 yards in total offense and just seven first downs on the night.

“These kids are resilient. They don’t give up,” said Clinton head coach Corey Fountain. “Last week took the air out of us, it really did. … But they found a way to get back up. This was a game of pride.”

Last week, Union County knocked Clinton out of the playoff chase with a 21-14 victory after a penalty nullified a go-ahead touchdown run in the fourth quarter. 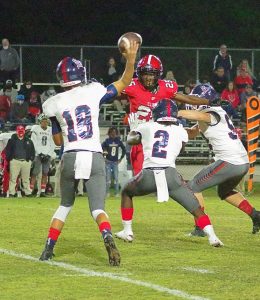 Then, earlier this week, the Red Devils learned that their annual rivalry game against Laurens was canceled due to a COVID-19 positive test within the Raiders’ program.

“At the end of the day, we’re not playing for a bowl ring. We’re not playing in the playoffs,” Fountain said. “These kids had to get that from the inside. They had to be intrinsically motivated to play this game. I thought this was gut-check time.”

While the defense set the tone early, the Clinton offense found its groove after some early struggles and rolled up 431 yards of total offense, including 224 on the ground.

Austin Copeland also connected with Kimon Quarles for a long touchdown through the air. Shy Kinard had 15 carries for 67 yards and a touchdown.

James was the team’s leading rusher on the night with one carry late in the game that went for 77 yards.

“Our young guys stepped up and executed, and our older guys were leading them in this game,” Fountain said. “It was fun to play in and fun to watch these guys mature.”

With no game against rival Laurens as was originally scheduled twice this season, the Red Devils (3-3) athletic department is attempting to find an opponent for a season finale on Nov. 13.

This high school football season was shortened as was the playoff format by the South Carolina High School League due to COVID-19. The pandemic also caused schools across the state to cancel and/or postpone games as initially scheduled due to outbreaks and quarantines during the season.