For the first two minutes or so of game time Friday night, things looked great for Laurens. 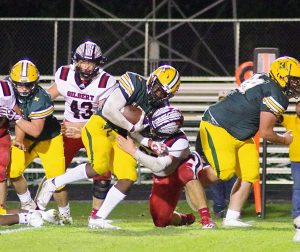 Sophomore quarterback James Rawl connected on a 42-yard pass to Jayden McGowan. Jeremiah Fuller found room for a 7-yard gain up the middle, and then Rawl and McGowan capped the game’s opening drive, connecting on a 7-yard touchdown pass for a 7-0 lead with 10:20 left in the first quarter.

Then Halloween came a little early as a full moon floated in the night sky above, and visiting Gilbert turned K.C. Hanna Stadium into its own house of horrors with a 49-21 victory over LDHS.

After the Raiders’ opening drive, Gilbert scored 35 unanswered points by half time and added two more scores in the third quarter.

“They’re a good team. They go really fast on offense, and our defense wasn’t able to match that intensity,” said LDHS head coach Daryl Smith. “On offense, we just couldn’t get anything going with any kind of consistency at all.”

Sophomore receiver Chance Jennings got behind the LDHS defense twice in the first half, scoring on 66- and 85-yard strikes from quarterback Izayah Whiteside.

Whiteside completed 11 of 17 passes for four touchdowns, and Jennings had four catches for 155 yards and two scores as the unbeaten Indians (6-0) outgained the Raiders 477-282 from scrimmage.

The Gilbert defense held LDHS to just 66 yards on the ground. Senior running back Colton Mason led all rushers with 152 yards on 26 carries with three touchdowns. 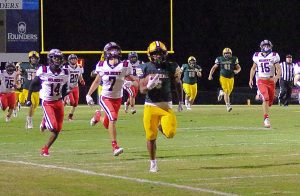 Laurens’ Jayden McGowan sprints down the sideline for a touchdown on an 84-yard reception during the third quarter Friday night against Gilbert.

Rawl completed 15 of 25 pass attempts for 216 yards and the two touchdowns to McGowan, but the sophomore also threw three interceptions. McGowan finished with six catches for a game-high 159 yards.

Due to schedule changes brought about by COVID-19, Gilbert, ranked No. 5 in Class 3A, was a late addition to the Raiders’ schedule, and the game turned out to be Homecoming and Senior Night for LDHS. Senior Jenna Armstrong was crowned Homecoming Queen during halftime ceremonies.

The Raiders’ game originally scheduled for next week (Nov. 6) against Hillcrest has been canceled due to a COVID-19 outbreak at the Simpsonville school.

LDHS (2-4) will have an open week next week and now plans to play intra-county rival Clinton on Nov. 13. Clinton was eliminated from Class 3A playoff contention with a 28-21 loss at Union County Friday night.

With the playoff format cut in half this season – only two teams from each region make the playoff field – by the South Carolina High School League, neither Clinton nor LDHS made the playoffs.