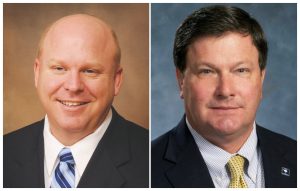 While there are several familiar names on the ballot for next week’s General Election, the only contested partisan race locally involves County Council Chairman David Pitts (D-Clinton) and the man he replaced on council in 2011, David Tribble (R-Clinton) facing off in the District 7 council race.

Tribble, who was also the one-time mayor of Clinton, left county council and spent one term in the state House of Representatives. Pitts won a special election to complete his term and was elevated to council chairman in 2018.

Pitts, the assistant superintendent of District 56 Schools, said he is a fiscally conservative Democrat who is pleased that Laurens County has among the lowest property tax rates in the Upstate.

“I want to continue to provide constituent service for the citizens of Laurens County,” he said. “Provide infrastructure in terms of police protection and fire protection while keeping taxes low. Growing the county. We’ve got a subdivision coming down (in Fountain Inn), and we’ve got to be prepared for the growth and manage that growth properly.”

Pitts said he was particularly proud of stopping payments to Greenville County Schools that resulted in keeping more than $1 million annually in Laurens County.

Tribble is hardly a political novice and said he has continued to work with local civic and professional organizations as a volunteer whenever he has been called upon.

“I’ve had an interest in service my entire adult life,” said Tribble, who was elected as mayor of Clinton to two terms during his 20s.

He now operates Tribble Health Funding, an independent health and life insurance agency based in Clinton. He defeated Brenda Stewart in the GOP Primary earlier this year.

Tribble said making Laurens County a place where people want to live and work while making sure the county government stays within its means are parts of his vision going forward.

“The left hand of that vision is having enough experience both in life and in politics to know how to make those levers work,” he said. “How to create and appeal to enough teammates to have that common vision. I think it’s going to be an energizing experience to serve.”