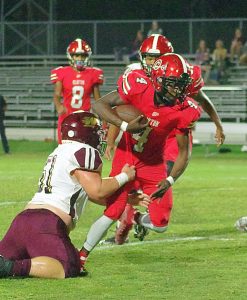 Clinton RB Shy Kinard (4) gained 150 yards on the ground and scored two touchdowns to lead teh Red Devils over Woodruff.

Clinton capitalized on three first-half Woodruff turnovers, and the Red Devils kept their playoff hopes alive in a 33-14 homecoming victory over the Wolverines Friday night at Wilder Stadium.

Kinard, who finished with a team-high 150 yards on 17 carries, added a 57-yard touchdown run in the third quarter to answer a Woodruff score that had cut the Clinton lead to 20-7.

Kimon Quarles added a 10-yard touchdown run to cap a 10-play, 75-yard drive that ate up most of the fourth quarter as the Red Devils salted the game away.

Woodruff’s Shamare Dendy gained a game-best 209 yards rushing on 27 carries, but the stingy Red Devils’ defense kept Dendy out of the end zone.

Junior quarterback Davis Wilson came off the bench and completed 4 of 5 passes for 70 yards, playing most of the game in relief of sophomore Austin Copeland, who has started every game this season for Clinton. Wilson had an injured ankle that kept him out of the lineup until last week’s loss at Chapman.

The Red Devils will travel to Union County next Friday, Oct. 30, in a game that could determine the second and final playoff spot in Region 3-3A.