(Editor’s Note: The Laurens County Advertiser is taking a look at each of the 16 projects proposed to be funded by the Capital Project Sales Tax (CPST) in Laurens County. The 1-cent sales tax will be put to a referendum in the Nov. 3 General Election. The projects looked at today are a proposed agricultural center and a Clinton branch of the Laurens County Library.) 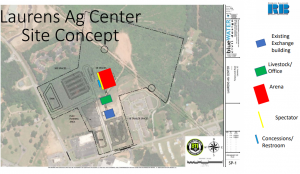 Site plan for the proposed agricultural center in Laurens. For a link to all the CPST projects go to
https://www.yestoinvestlc.com.

Agriculture has long been a vital cog in the Laurens County economy, and organizers behind a proposal for an agricultural center believe an investment in the center through the Capital Project Sales Tax would turn the county into a centrally located hub for the state’s farmers.

“We’re sitting on a gold mine by sitting right off the interstate,” said Annette Bodie, a Clinton High agriculture teacher who coordinated the proposal for the $7.9 million agricultural center. “We’d be able to offer horse shows and things like that. Right now, there’s no place in Laurens County for horse shows at all.

As proposed, the agricultural center would sit on the current Exchange Building site in Laurens, which would be purchased for $1.2 million. The current event building would be renovated and a 41,250 square-foot covered arena would be added to the property along with offices to house the Clemson Extension Service and 4-H.

Clemson is home to the T. Ed Garrison Livestock Arena, an 88,000 square-foot covered arena, which his the largest indoor show ring within a 200-mile radius.

According to a study published in 2013 by Clemson University and commissioned by the South Carolina Upstate Equine Association, the T. Ed Garrison Arena draws some 100,000 visitors and generates $8.9 million in total economic impact for the tri-county area of Pendleton, Anderson and Seneca. 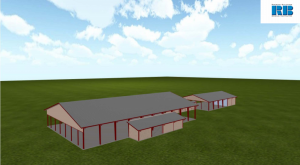 A covered arena would seat around 500 people and be the home of livestock and equestrian shows.

The arena, which sits near the Clemson University campus, hosts horse shows, dog shows and other events which annually brings visits from 20 states and Canada to the area.

Bodie sees a similar role for an agricultural center and arena located in Laurens County.

“Of the 16 projects that have been proposed, the ag center is one of the few that would be self-sustaining,” she said. “It should pay for itself and will bring more money into the county.”

Bodie also said the covered outdoor arena would be the only structure of its kind in the county and she sees it as a multi-purpose venue, which could also host concerts and other events with seating for more than 500 people.

She said local hospitality businesses – restaurants and hotels – would be see increased business every time an event is hosted at the proposed ag center.

As a teacher, Bodie said she also sees the merits of the ag center would offer to students who are interested in agriculture, many of whom travel out of the area for horse, cattle and other related shows throughout the year.

Locally, the center could provide a gathering place for members of the agriculture community to interact with the Laurens County Cooperative Extension Office.

“It could provide an easily accessible complex for agriculture to come in and get help with plants and problems and bring in soil samples and those sorts of things,” said Area Extension Agent Bryan Smith. “It’d be a nice place to have 4-H programs and 4-H events.”

Smith said he also sees the impact the relatively unique facility could have in bringing visitors to the area.

“People would be coming in from out of the county because it would be a nice facility but there’s always a demand for those kinds of things,” he said.

Bodie said she canvassed local members of the agriculture community when putting together the proposal. The list of wants from different groups was diverse, but she said she believes the concept hit on many of them.

“We tried to include as many things as we could in the proposal,” she said. “We’ve gotten a lot of positive feedback.”

She also believes the local business community will be pleased because it is centrally located in Laurens County.

“We looked at a lot of different sites and wanted it to be deep in Laurens County so people would come here and stay in local hotels and eat in restaurants in Laurens and Clinton.”