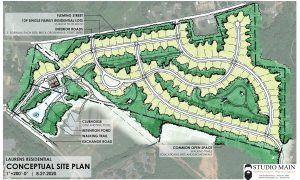 on Tuesday night took the first step to approve the sale of city property which may soon become a housing development for at least 130 homes.

The property is a 66-acre tract behind The Ridge at Laurens that will eventually have entrances both on Exchange Drive and Fleming Street Extension, according to Mayor Nathan Senn during remarks Tuesday night.

Council had deliberated for some time in executive session, and when the meeting was called back into session, attorney Tom Thompson presented the ordinance required for the sell of city property. The motion from councilman Martin Lowry was followed by seconds from several council members, and Lowry insisted that Mayor Nathan Senn be the one to announce the housing development since Senn had done all the preliminary work to make this project happen. 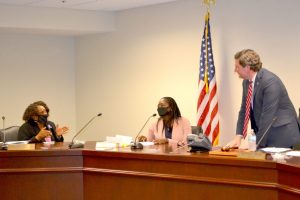 The ordinance called for a sale of the 66-acre tract for $350,000 to SK Builders, Inc of Greer, which Senn said was voted the Upstate’s Best Builders by readers of The Greenville News.

“The reason these homes are in this price range is because realtors say you can’t keep a house on the market in that price range because they are in such high demand,” Senn said. Senn explained that in an executive session this summer, council expressed its willingness  for Senn to begin a search for a developer for the property.

“We are using this land to meet the need for housing in this city,” Senn said. “This is property which was purchased by the city on Oct. 14, 1947 – almost 73 years to the day. We have a need for housing and this action shows we are not sitting on a resource and letting it gather dust for another 73 years.”

developments built by a number of companies before beginning talks with SK Builders, Inc., and the signs of growth exhibited by the city encouraged the company to begin plans to acquire the property.

Following the unanimous vote, council members expressed how proud they were of Senn for taking the initiative to seek out such a project for the City of Laurens.
“Cities don’t need to be in the habit of holding onto property without a use for it,” Senn said after the meeting. “We are tremendously proud that Laurens has taken this next, very important step in its growth. In attracting a well-known and respected builder to our city we have shown that Laurens is a thriving community that seeks to grow while preserving its unique charm.”