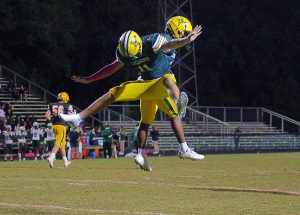 The Green Hornets, who played their first game of the season Monday due to delays related to COVID-19 outbreaks in the program, lost for the second time this week, falling to 0-2.

LDHS got two touchdown runs from Jayden McMillan and a pair of touchdown catches from Cayson Elledge as part of the Raiders’ second straight win.

“I thought we were more consistent tonight,” said LDHS head coach Daryl Smith. “We still had a few errors but overall it was much more consistent with our drives and on defense with a couple of fourth-down stops. One thing the kids responded to well was starting fast. We really emphasized that a lot in practice, and they did that, so that was good to see.”

In between McGowan’s two scores, James Rawl connected with Elledge on a 48-yard touchdown pass for the first of his two scores. The pair of sophomores connected again on a 37-yard scoring strike with 7:54 left in the third quarter to put LDHS ahead 28-6.

Elledge finished with three catches for 100 yards. He has at least one touchdown reception in three straight games. Rawl finished with 188 yards on 9 of 20 passing with two touchdowns and a late interception. 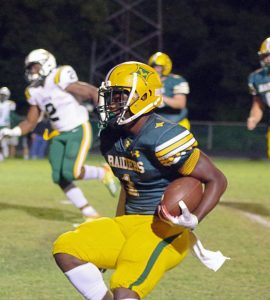 Junior Zy Todd, who finished with 58 yards on 10 carries, finished the scoring for the Raiders with an 11-yard run with 8:43 left in the game.

Despite the victory, the Raiders were eliminated from playoff contention in the South Carolina High School League’s pared down playoff format due to COVID-19. Only the top two teams from each region make the playoffs this year. Greenwood defeated Greenville 50-27 Friday night to clinch the Region 2-4A title, and Greenville finished in second with one loss.

LDHS has one more region game at Greer next Friday. The Raiders were initially scheduled to play Clinton, but due to schedule changes relating to COVID, Clinton is to play Union County on that date.

Smith said if Clinton fails to make the Class 3A playoffs, the two intra-county rivals expect to play one another on another date. LDHS also has a nonconference game scheduled for Nov. 6 against Hillcrest at K.C. Hanna Stadium.